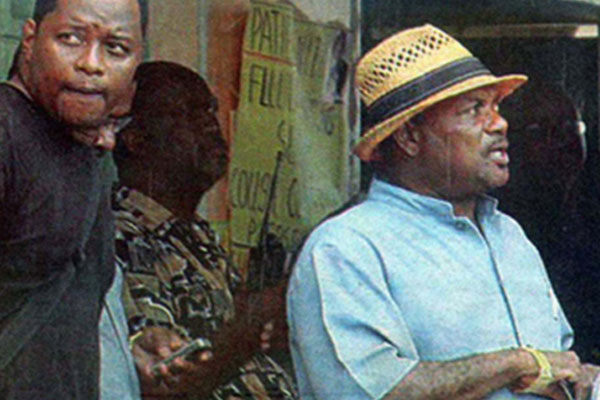 The three friends were killed in a Freeport house on Tuesday night, bringing to 37 the number of people killed by police for the year. David “Junior” Baker was immediately identified following the shoot­ing, which occurred at 7.30 p.m. when a team of officers, led by Senior Supt Johnny Abraham, boarded the house in Calcutta No 2, Freeport. The other two were Ruben Richens, 23, and Kareem Edwards, 19, who police said were wanted for murder and several shootings in the Nor­thern Division area but they were hiding in Chaguanas. Edwards is Baker’s nephew.

fire. When the shooting they claimed emanated from the house finally stopped, officers walked in and met the three men severely wounded.

Police said they took them to the Couva District Hospital but by the time they got there, all three men had died.

The officers said they recovered two firearms, two bullet-proof vests and several spent shells. The Express met the relatives of the three men at the Forensic Science Centre in Federation Park yesterday where the bodies had been taken to be examined by a forensic pathologist. Dr Valerie Alexandrov spoke to reporters following the examination and conclu­ded all three men were fa­cing the police at the time they were shot.

“All three were shot in the front. They were face to face with the police. Their hearts were punctured and there were no bullet entrance wounds from their back. They were not sitting or laying down and they all died from internal blood loss,” said Dr Alexandrov. He was asked if there was any gunpowder residue on the hands of any of the three men, but he said swabs of the men’s hands had been taken but if they were using a semi-automatic pistol, as opposed to a revolver, there was a slim chance any residue would show up on their hands.

He said compared to a revolver, which when fired emits residue that can be deposited on the user’s hands, a semi-automatic weapon would be closed, hence no residue. Kadisha Prince, David Baker’s elder sister and Kareem Edwards’ aunt, said, “I raised David and we raised Kareem and all Kareem would do is play football, and to our family, my brother was good. I mean people make mistakes, but he (Baker) had two kids and he was living for them.&rdquo:

She said on the night they were shot by the police, “all three of them were home in their boxers (underwear) and my nephew (Edwards) was running away when the police shot him. These three men died like dogs and they did not get a chance to defend themselves.”

She added, “David gave his parents a little trouble..lil boy thing, but he never had no trouble with the police.”

She said while Baker did welding, Edwards practised woodworking for a living. Another close female friend of Baker, who was crying when she spoke to reporters, said, “He was home. He was home. Junior (Baker) wasn’t do­ing nothing for seven months because he was home.” She added that on Sunday, “He cooked for my son and he say to me, ‘Baby, doh do nothing today.’ He cooked rice, lentils and stew chicken. He was always hugging up he daughter. That was he life, that was he life, he daughter. I mean he was the father of two girls, one five-year-old and a two-year-old.”

Ruben Richens’ relatives also spoke. A woman who did not want to be identified said about a month ago, the La Horquetta police beat him after they teased him about some powder on his neck and “they called him a f—-t and, well, he must be answer them”. Desta Richens, Ruben’s mother, said weeks before he died, she began praying especially for him, even while at work.

“I suspect he got involved with the wrong comwpany. I prayed for my kids, him, espe­cially, and I got nervous in the last few months Lord, give me strength. I would remember that he liked to quarrel with his sisters and he did not have any children, but I remember that he worked for a while. Three years ago,” she said.

Another relative of Richens who did not want to be named said, “All three men grew up together. Ruben and David were like Bonnie and Clyde, and Ruben did not have no warrant. He never get locked up for nothing.” Another relative added, “We know about David Ba­ker’s past but they grew up together.” She said it was not right but one couldn’t tell a “man who he would lime with”