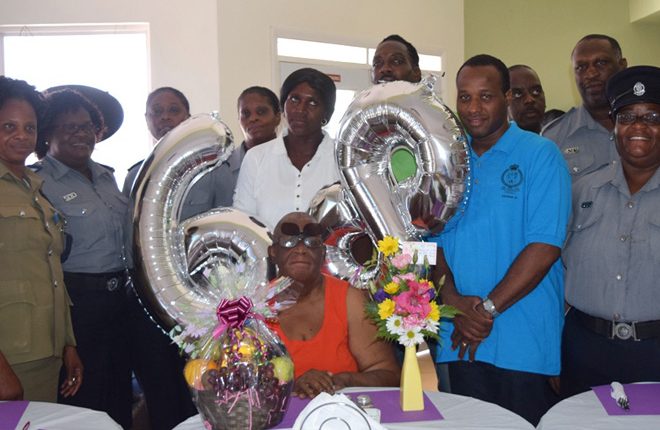 Having passed from the Police Training School in 1997, the group has Been meeting every year to commemorate the occasion since.

Course #27 has also been inviting the persons who taught them during the training to be a part of their anniversary activities that have even included trips abroad. Unfortunately, Inspector (retired) Carol Williams, who was one such instructor, had to end her participation due to physical limitations she developed.

For this year’s anniversary celebration, Course #27 decided to pay tribute to Inspector (ret.) Williams. As per usual, their past instructors were invited and the group treated her with lunch and presented her with flowers and a fruit basket. But they did not stop
There, Course #27 went a step further and invited her three children to be involved in the activity.

Speaking on behalf of the group, Corporal Marvin Thompson described Inspector (ret.) Williams as one of the instructors who had a significant impact on them during their training.

Inspector (ret.) Williams is also held in high regard within the Royal St. Christopher and Nevis Police Force as she was the first female
officer to have reached the ranks of sergeant and inspector. She was also the first female allowed to continue serving as a police
officer after getting married and giving birth to a child.

However, Corporal Thompson added that the moment was bittersweet because the group was also mourning the loss of a colleague. Sergeant Leon Powell, who was shot and killed recently, was a member of Course #27.