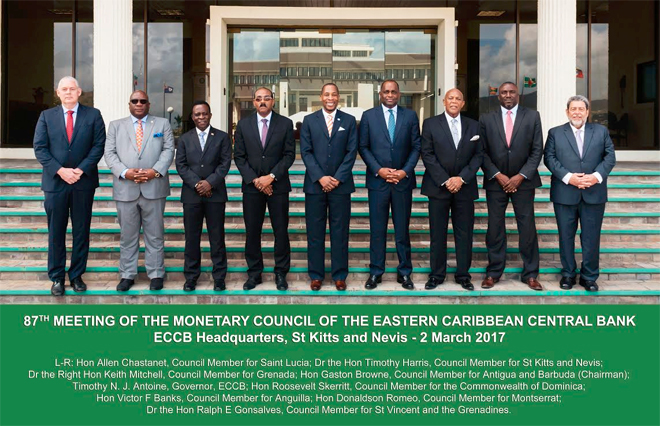 Credit reporting system for the Eastern Caribbean Currency Union expected to boost lending, which has been falling in ECCU countries

(PRESS SEC) — Access to credit is one of the pillars of private sector growth. So in an effort to improve citizens’ access to loans from financial institutions, the Eastern Caribbean Central Bank (ECCB) is in the process of developing a credit bureau for the eight-member Eastern Caribbean Currency Union (ECCU).

The establishment of a credit bureau for the ECCU is expected to improve access to financing for micro, small and medium-sized enterprises, which make up the lifeblood of our economies.

A credit bureau is an effective mechanism for credit risk management because it collects and shares information on how individuals and businesses manage their credit from lending institutions. A credit bureau therefore improves the lending process by enabling better and faster decision-making based on detailed credit profiles. The availability of a full credit history for borrowers therefore improves their access to credit while discouraging discriminatory lending practices and reducing default rates.

As at December 2015, the non-performing loan (NPL) ratio at financial institutions in the ECCU was 17.03%, with those in St. Kitts and Nevis having a slightly better NPL ratio of 15.93%.

The credit reporting system is being organized in collaboration with the International Finance Corporation (IFC), a member of the World Bank Group, and is coming at a much-needed time.

That’s because the ECCB Governor, Mr. Timothy Antoine, presented a report during the 87th Meeting of the Monetary Council of the Eastern Caribbean Central Bank, which indicated that banking sector credit to the private sector, including businesses and households continued to fall last year in the Eastern Caribbean Currency Union.

The Communiqué issued following yesterday’s 87th Meeting said that the credit reporting system, which is in the works, is “expected to assist in the reduction in lending rates.”

It further stated that, “Credit reporting legislation is necessary to promote the growth and development of the ECCU Credit Reporting System and the development and operationalisation of a credit bureau within the single financial and economic space.”

The Communiqué continued: “The ECCB has engaged relevant stakeholders across the ECCU including: the Chambers of Commerce, Attorneys General, Ministries of Finance, financial sector regulators and potential participants in the credit bureau including banks, nonbank financial institutions, telecommunication companies, utilities companies and hire purchase retailers, to craft the Harmonised Credit Reporting Bill and Regulations.”

The Monetary Council is the highest decision-making authority of the Eastern Caribbean Central Bank. It comprises eight Ministers of Finance, one from each member government. Prime Minister Dr. the Honourable Timothy Harris is the Minister of Finance in St. Kitts and Nevis. Prime Minister of Antigua and Barbuda the Honourable Gaston Browne assumed the one-year chairmanship of the Monetary Council during its 85th Meeting held in Antigua on Friday, July 22nd, 2016.

Three months before that date, ECCB Governor Mr. Timothy Antoine – during a presentation to the St. Kitts-Nevis Federal Cabinet at Government Headquarters on Monday, April 18th – said that the Eastern Caribbean Currency Union registered a 6.1% decline in private sector credit in 2015, but St. Kitts and Nevis registered growth of 3.17% in private sector credit that same year.

“This probably explains partly why you are the fastest growing country in the OECS,” Mr. Antoine told Prime Minister Dr. the Honourable Timothy Harris and the Cabinet of Ministers last April.

Additionally, data from the Development Bank of St. Kitts and Nevis presented on June 28th, 2016 showed that 598 business loans (including under the Fresh Start Loan Program for Micro, Small and Medium-Sized Businesses) were disbursed over the previous 17 months to the tune of $40.7 million.

Launched in September 2015 by the Team Unity administration, thanks to the assistance of the Bolivarian Republic of Venezuela, the Fresh Start program administered through the Development Bank provides concessionary loans and technical assistance to entrepreneurs who want to either start or expand their micro, small or medium-sized businesses. The Fresh Start has already disbursed $28.5 million to 427 successful applicants; of them, 100 are in Nevis.

For 2017, the Team Unity Government has budgeted for $35.4 million to be made available to micro, small and medium-sized businesses through the loan program.

“We are taking a chance on small businesses because, all over the world we are advised that, they have become the engine of economic growth,” Prime Minister of St. Kitts and Nevis Dr. the Honourable Timothy Harris has said.