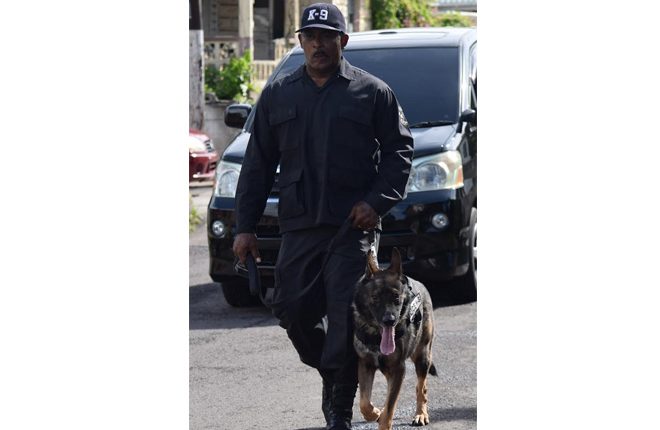 (PRESS SEC) – Targeted operations by the Royal St. Christopher and Nevis Police Force (RSCNPF) in collaboration with the Customs & Excise Department and the St. Kitts-Nevis Defence Force are bearing fruit, helping to make our communities safer.

The RSCNPF is also analyzing crime trends, making its targeted operations even more precise and effective.

“We have stepped up our targeted operations in recent times, which have netted significant finds and significant arrests in terms of these [seized illegal] firearms and arrests in relation to break-ins and burglaries,” Andre Mitchell, Assistant Commissioner of Police (ACP) with responsibility for the Crime Directorate, told the Press Unit in the Office of the Prime Minister yesterday, Monday, May 15th, 2017.

ACP Mitchell went on to note that five persons were arrested and charged over the weekend in relation to the break-in and larceny of the Island Purified Water facility at the corner of West Bourne Ghaut and Fort Thomas Road.

The Assistant Commissioner of Police who leads the Crime Directorate also said that, “We are looking at and analyzing our crime trends, and we are putting in the necessary police presence in terms of patrols, etc., so we are not going out there aimlessly.”

As a result of this hotspot analysis, the RSCNPF is finding and seizing more illegal firearms and ammunition during police patrols, which is one reason why the 21 illegal firearms that have been seized so far this year comprise almost 60 percent of the total (36) seized in 2016.

Furthermore, this hotspot analysis is helping to set the direction and guide the operations of the Royal St. Christopher and Nevis Police Force while ensuring that resources are utilized to achieve maximum impact.

“It is a methodology we are using,” ACP Mitchell further stated, adding: “So we are looking at hotspots, at the crime trends and at where these things normally happen – and we are focusing our efforts and resources. I think we are making optimum use of what [resources] we have and employing them in a very strategic sense around the clock.”

Readers might recall that one year ago, on Monday, May 23rd, 2016, the Press Unit in the Office of the Prime Minister visited Andre Mitchell at his office to get an understanding of hotspot analysis. That afternoon, a cluster map identifying locations of statistically significant crime hotspots in St. Kitts could be seen on his desktop computer screen.

Corporal Winston Thompson of the Local Intelligence Office in the police force, who created the cluster map based on crime data, sat in ACP Mitchell’s office. “The green dots represent break-ins,” Corporal Thompson said, pointing to the map of St. Kitts on his laptop. “The blue dots represent robberies. The red dots represent homicides, and the orange dots represent non-fatal shootings,” he added.

This crime mapping or tracking – of the nature of crimes, the locations where they occur, the times and dates when they occur, and their frequency – generates valuable data that can be used in a number of ways.

For instance, Assistant Commissioner of Police Andre Mitchell said one year ago in his office that the Royal St. Christopher and Nevis Police Force would present the findings of the hotspot analysis to the Police High Command in Taiwan.

Taiwan and St. Kitts and Nevis are partners in a far-reaching crime-fighting plan – the blueprint for which is an extensive closed-circuit television (CCTV) system that has garnered stellar results for the police in the Republic of China (Taiwan) since the Taipei City Government installed a total of 13,699 cameras between July 2009 and November 2012.

The Governments of St. Kitts-Nevis and the Republic of China (Taiwan) have entered into a formal arrangement that would see police cooperation between the two countries. This cooperation agreement provides for a law enforcement personnel exchange, to include a technical component and study opportunities in Taiwan.

Prime Minister Dr. the Honourable Timothy Harris and His Excellency George Chiou, Ambassador of the Republic of China (Taiwan) to St. Kitts and Nevis, signed the bilateral agreement on police cooperation on Friday, December 2nd, 2016, at Government Headquarters. That afternoon, the Ambassador also handed over EC$5 million for the Cities and Roadways Surveillance System CCTV Project – Phase One.