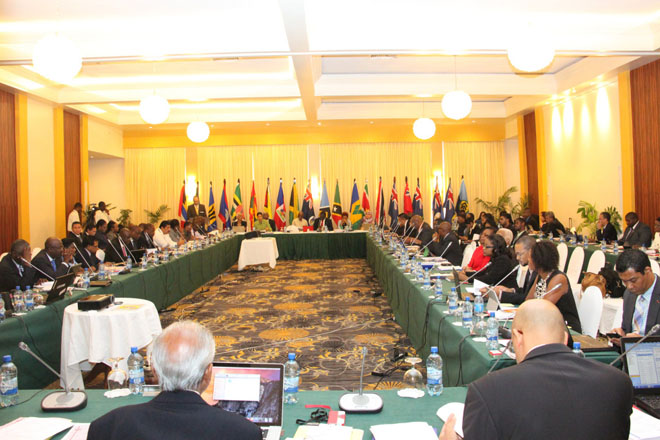 Georgetown, Guyana — Action to ensure that the CARICOM Single Market (CSM) is placed on a more efficient footing to benefit Caribbean Community nationals; the importance of standards and consumer protection; and the role of the private sector in regional development, were among the key matters trade ministers took decisions on when they met in Georgetown, Guyana, 23-24 April, 2015.

Ministers, at the fortieth meeting of the Council for Trade and Economic Development (COTED) placed special emphasis on consolidating the work of the CARICOM Single Market and Economy (CSME) to boost regional development.

They held extensive discussions on procedures related to the Single Market, particularly with respect to establishing fully web-based, harmonised administrative procedures that would reduce the time and challenges associated with applying for documentation under the five core regimes of the CSME. The harmonization also has positive implications for e-governance in the Community.

The meeting was held against the background of a continuing volatile global economic environment, and CARICOM Secretary-General Irwin LaRocque reminded delegates that utilising the provisions of the CSME to its fullest, was the best option. The CSME, he said, would “allow us to exploit the full potential of our human resources as our skilled personnel move freely throughout the Community. The easier movement of capital would help to generate much needed investment. Our trade in goods and services can only be enhanced by the removal of whatever restrictions still remain.”

The ministers considered work to be completed towards harmonization and standardization of administrative practices and procedures; enhancing the effective functioning of the services and labour markets through standardized licensing, certification and mutual recognition of licences and certificates; and widening the scope of participation by stakeholders and beneficiaries in the process of decision-making, implementation and operation of the Single Market. This process is supported by the CARICOM Trade and Competitiveness Project (CTCP) funded by the government of Canada.

The Council also paid attention to Community’s development, adoption and implementation of regional standards. In this regard, roles for the Council, the Caribbean Regional Organisation for Standards and Quality (CROSQ) and member states have been clearly identified.

Placing emphasis on the critical importance of the services sector to the region’s economy, the Council welcomed the announcement by Suriname of the establishment of the Coalition of Services Industries.

Underscoring the significance of intra-regional trade to the Community’s development, the ministers welcomed the assurance by sugar producing countries, Guyana and Belize, supported by the Sugar Association of the Caribbean (SAC) that they were gearing to provide sustained supplies to the regional market. The ministers mandated the CARICOM Secretariat to collaborate with the SAC and regional sugar-producing member states to compile a paper within three months, on regional demand, supply and global trade issues related to the commodity.

The meeting approved the revised procedures and forms that would facilitate smoother functioning of the system for requests for suspensions of the Common External Tariff (CET).

Ministers also agreed to a special session of the COTED to pay attention to the supply of petroleum products.

The challenges member states encountered in intra-regional trade were also a point of focus at the meeting and ministers agreed on steps to be taken at the bilateral level to resolve some of those issues.

With respect to the COTED’s engagement with the regional private sector, which has implications for the conduct of business in the region, strides have been made since the last meeting of COTED in November 2014. An examination of the findings of a consultancy on the role of the private sector was concluded earlier this year and it was determined that the Caribbean Business Council (CBC) remained the best vehicle to effect the public-private structured interaction. The CBC is expected to be operational by the end of September, 2015.

The private sector is a critical partner in the region’s quest for economic resilience, which is a key element of the Community’s five-year strategic plan.

Special attention was paid to relations with Cuba. Ministers underlined the strong bonds between CARICOM and Cuba, and acknowledged Cuba’s generous offer of duty-free access for a wide range of CARICOM products into the Cuban market. They agreed to review urgently outstanding requests from Cuba for additional preferential access to CARICOM more developed countries which will pave the way for a joint commission meeting between the two sides to be held by July 2015.

The COTED also reviewed member states’ preparation for implementation of the World Trade Organisation (WTO) trade facilitation agreement which was adopted at the ninth WTO ministerial meeting in Bali.

On Thursday, the first day of the ministerial meeting, the ministers received a delegation from Kazakhstan, which will be hosting an international exposition under the theme ‘Future Energy’ in its capital Astana in 2017. Yerzhan Ashikbayev, deputy minister of foreign affairs of Kazakhstan, in addressing the COTED, called for participation by all CARICOM member states and the CARICOM Secretariat in the exposition.