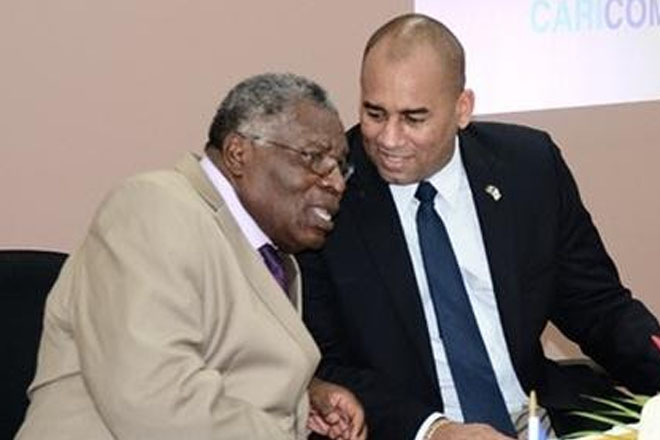 Bridgetown, Barbados (BGIS) — Although the CARICOM Single Market and Economy (CSME) is 71 percent complete, more needs to be done “to complete the dream of engineering that will make the Caribbean and CARICOM realise their dreams and foster a unity of purpose”.

This is according to Barbados’ ambassador to the Caribbean Community (CARICOM), Robert ‘Bobby’ Morris, as he delivered the feature address at the closing ceremony for the Students Engaging the CSME Through Field Promotion, held last Friday.

The project, coordinated by the CARICOM Secretariat, the Prime Minister’s Office and the CSME Unit, saw 19 students from the Antigua State College spending one week in Barbados investigating CSME opportunities.

Pointing out that CARICOM leaders have to be pragmatic in crafting a CARICOM that is “feasible and workable”, Morris admitted that the CSME would “take time” to come to fruition.

He added: “We must never appear to despair, and just as slavery did not destroy the spirits of our ancestors, setbacks along the way must not, including the lamented Federation and postponing the dream of the CSME, burden our ambitions.”

Speaking against the background of employment generation and as a trade unionist, the envoy said that while the Caribbean Community needed the networking of entrepreneurs, every effort should be made to create opportunities that would be beneficial to employees.

In her remarks, Antiguan CSME focal point spokesperson, Michelle Joseph, described the project as a “tremendous success”, where upon returning home participants would, among other things, be able to apply for a CARICOM skills certificate to establish a business in another member state.

“Integration starts with each and every one of us first”, she said, stating that the advent of technology (social media) had made the integration process much more of a reality.

“I urge you as the next generation in the region to use the technology and bring to light that which is in our thoughts and dreams and take advantage of the opportunities that are afforded,” Joseph said.

Director general of the Office of Trade Negotiations, Ambassador Gail Mathurin, said that in the first phase of the project in 2008, approximately 300 tertiary students were exposed to CSME training. As a measure of success, she disclosed, one student from Grenada had expanded her business and was now exporting wood products to other CARICOM member states.

The Antiguan students are expected to complete a mission report and put what they have learnt into practice, as well as share their experiences in Barbados via social media on Facebook, Twitter and Instagram. Funding for the promotion was provided under the 10th European Development Fund. A similar cohort of students from Barbados will travel to Jamaica in the near future.