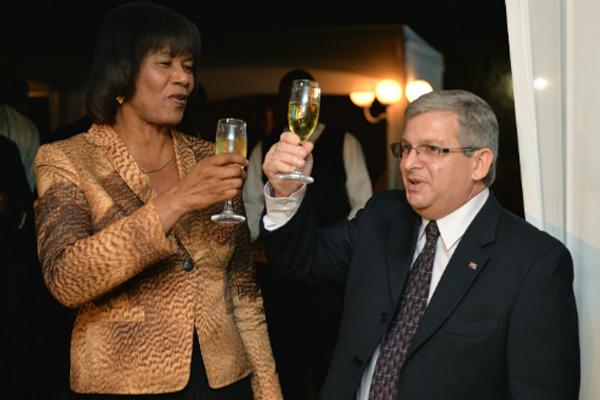 Kingston, Jamaica (JIS) — The Caribbean Community (CARICOM) is slated to benefit from increased support from Cuba in the areas of health, education, disaster response, and support for the disabled.

Cuba’s Ambassador to Jamaica, Bernardo Guanche Hernández, said his Government will be financing the establishment of the Caribbean Regional School of Arts in Jamaica; and the Centre for the Treatment of Physical Disabilities to assist physically challenged children and youth, which will be based in Guyana.

Ambassador Hernández was speaking at a reception held Thursday, January 23 at his Millsborough Avenue residence in St Andrew, to mark the 56th anniversary of the Triumph of the Cuban Revolution (Cuba’s National Day), commemorated on January 1.

He said that Cuba values its friendship with Jamaica, noting that both countries “should be really satisfied with the relations between our governments, parliaments and peoples.”

The Ambassador recalled visits to Cuba by Prime Minister, Portia Simpson Miller on two occasions last year, while leading delegations to the Second Summit of the Community of Latin American and Caribbean States (CELAC) and the Fifth Caribbean Community-Cuba Summit in Havana, on January 28 and December 8, respectively.

He also cited visits by Minister of Health, Fenton Ferguson, and Minister with responsibility for Sports, Natalie Neita Headley.

Ambassador Hernandez said the excellent relations between Jamaica and Cuba was further strengthened with the granting of scholarships to five young Jamaicans to study in Cuba.

He said his Government’s quick response to a request from the Government of Jamaica to assist with the training of medical personnel in response to the Chikungunya virus and in preparation for the Ebola threat “opened a new chapter in the excellent relations between our two nations.”