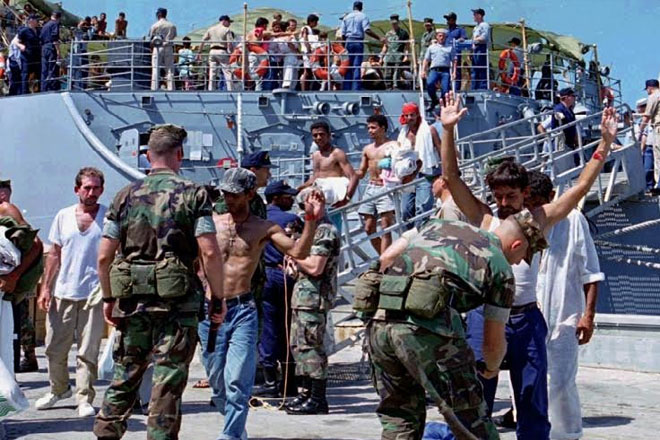 Cuba to raise immigration concerns at talks with US

(Caribbean360) The United States and Cuba will hold a new round of migration talks today, to review the progress made on migration agreements between the countries and discuss cooperation to combat irregular immigration.

But Cuba has signaled it has concerns about the agreements, which it intends to raise.

Ahead of the meeting at the US Department of State, the Cuban Embassy said the delegation from Havana planned to reiterate its concern about the US “wet-foot, dry-foot” policy which it said “encourages illegal immigration . . . and violates the spirit and norms of current accords”. Under that policy, Cubans who make it to the United States can remain legally and obtain permanent residency after a year and a day.

Also of concern to the Cuban government is the Cuban Parole Programme for Medical Professionals that allows Cuban medical personnel conscripted to study or work in a third country under the direction of the Cuban government to enter the United States – which it says deprives Cuba of vital resources and affects cooperation efforts with other countries – as well as the Cuban Adjustment Act which provides for a special procedure under which Cuban natives or citizens and their accompanying spouses and children may get a green card (permanent residence).

“The Cuban delegation will highlight its concern over the rise, a result of the aforementioned policies, of illegal, unsafe and disorderly emigration of citizens who legally leave Cuba and arrive in a first destination country, from where they continue to travel in an irregular fashion to the United States, becoming victims of trafficking networks and organized crime, and creating situations such as that facing Cubans currently amassed in Costa Rica and other countries of the region,” the Cuban Embassy in Washington said in a statement.

Washington, on the other hand, says the US-Cuba migration accords provide for the “safe, orderly, and legal migration of Cubans to the United States”.

The last migration talks were held in Havana in January. A planned July session was postponed due to the re-opening of the US and Cuban embassies in July and August.

The reestablishment of diplomatic relations, the re-opening of embassies, and the process of normalizing relations with Cuba have not changed US policy on Cuban migration.

Meantime, officials from both governments will meet for the second Counter-Narcotics Dialogue tomorrow to discuss ways to stop the illegal flow of narcotics to and from Cuba and the United States, and explore ways the two countries can cooperate on this issue.