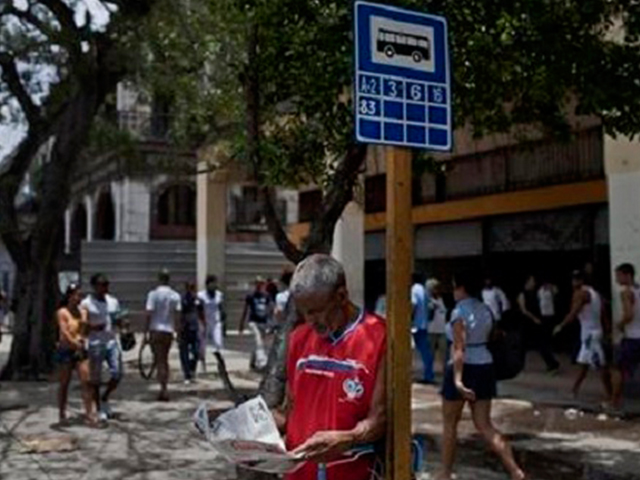 More than an hour after its launch, the site http://www.14ymedio.com was directing readers inside Cuba to a page dedicated to scathing criticism of blogger Yoani Sanchez by well-known pro-government writers. Access outside Cuba appeared to be unimpeded.

Sanchez accused the Cuban government of using its control of the country’s Internet to divert readers to the critical site.

“Bad strategy by the Cuban government to redirect our site from Cuba,” she wrote on Twitter. “There’s nothing more attractive than the forbidden.”

The government has made no official comment on Sanchez’s site, though it considers all dissidents to be mercenaries paid by Washington to stir up trouble.

An independent Internet analyst said it was likely that Cuba’s state telecommunications company, Etecsa, had altered the so-called domain name system, which translates the Web-page names typed by users into the numerical Internet addresses that direct a browser to a site.

A check of 130 cities around the world found the problem was only occurring inside Cuba, said Doug Madory, a senior analyst for the New Hampshire-based Internet analysis firm Renesys. While a hacker may have altered the domain name process for Sanchez’s site, the fact that the problem was still occurring hours after it began indicated that Etecsa was complicit, he said.

“They would have the ability to make changes to DNS. They edit that then it will redirect where you go when your browser tries to open the website,” Madory said. “This would be probably a pretty quick fix. Just as it would be easy to add in, it would be easy to remove.”

M H Lagarde, a Cuban blogger who has frequently written critically of Sanchez and in favour of government policy, said the critical site, www.yoanislandia.com , had existed for some time but he didn’t know who ran it. He said an article of his on the site was used without asking his permission. Other writers whose articles appeared on the site did not immediately respond to calls and emails seeking comment.

Before being hacked, www.14ymedio.com offered feature and news reporting, opinion, sports and even hair and beauty tips that Yoani Sanchez hoped would challenge the monopoly on information by the government. The site was seen as testing both government tolerance for dissent and Sanchez’s ability to parlay her international blogging success into a wider domestic audience.

It went live just after 8:00 am Havana time with offerings including reporting with a critical slant toward the government. One feature looked at petty violence through the lens of a night in one of Havana’s main hospitals.

Other offerings included an interview with a detained dissident writer and a sports feature on the alleged official neglect of soccer in favour of baseball. The site also had more quotidian elements including a weather report, an index of the price of staple foods such as pork and tomatoes, and five tips for fixing dry and damaged hair.

Sanchez and her husband, Reinaldo Escobar, say they have been working for months with a staff of nine contributors from around the island to produce the daily updated website and a weekly PDF of what they say will be a newspaper dedicated to providing Cubans with essential information — rather than attacking the government.

The PDF version can easily be distributed by memory stick, one of the main ways Cubans share documents and information. The PDF available Wednesday was far skimpier than the site itself, containing simply the hospital article and the editorial staff’s statement of values.

Escobar, who will be the editor-in-chief, told The Associated Press the paper will not have a paper version, seeking to avoid legal trouble by keeping distribution solely online. Cuban law prohibits the distribution of independent mass media that the government sees as damaging the national interest. In addition, newspaper publishing is not on a list of approved private businesses, so there is no way for Sanchez and Escobar to get a license to operate and hire staff.

Sanchez has gained global renown and a string of foreign awards for her blog “Generation Y,” which offers scathing criticism of Cuba’s communist government. She has more than 600,000 followers on Twitter, but she is far less well known at home, where Internet access is expensive and unavailable in virtually all homes and few businesses.

Several Cubans told the AP they were unlikely to read the new newspaper because of the lack of home Internet and the relatively high cost of $4.50 an hour to access the Web from government Internet centres or hotels with WiFi.

In government-run internet centres in the capital, the few people online Wednesday morning were checking their email or Facebook.

“Cubans who live here use the internet to find out how their families overseas are, chatting a little bit and getting emails,” said Yani Garcia, a 38-year-old sales supervisor who lives in Caracas, Venezuela. “It’s an expensive service … almost five dollars.”

Dissidents already produce a handful of news sites from inside Cuba, and the Roman Catholic Church prints two major magazines. But none are seen as true competition for Cuba’s three widely distributed state-run newspapers or its official television or radio stations.

Sanchez’s blog is incorporated into the new publication.

Escobar said 14ymedio is being funded by independent investors, both Cubans and foreigners, although he declined to reveal their identities, or the names of his staff, until after the paper began publishing.