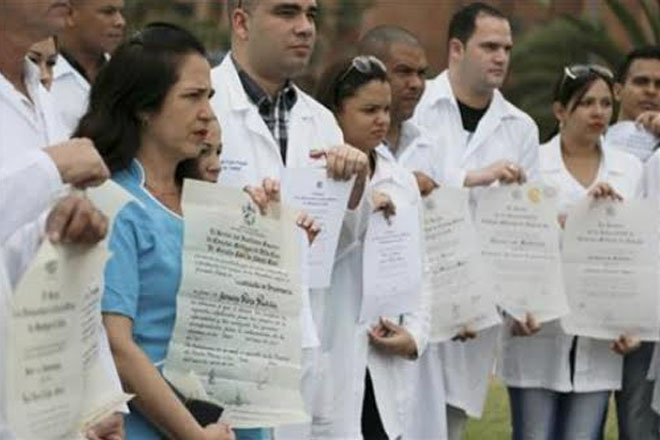 Bogota, Colombia (AP) — About 100 Cuban doctors who deserted a medical mission in Venezuela and have been stranded for months in Colombia seeking entry into the US staged a protest Saturday to draw attention to their plight.

The health care workers say they fear the delays in processing their visa requests under a 2006 program aimed at luring Cuba’s medical talent could be a sign that President Barack Obama is seeking to end the incentive as part of his campaign to normalise relations with the communist island.

Wearing white doctor’s coats and brandishing their diplomas, the Cuban medical workers gathered in a plaza in Kennedy, a working-class neighborhood built in the 1960s with funds from John F Kennedy’s Alliance for Progress. Several described how widespread shortages and mistreatment in Venezuela is leading many to sneak across the border seeking a new start in the United States. While they say conditions in Colombia are better, the cost of living is higher and many say they’ve had to borrow money from strangers and surviving on a single meal a day.

Ailen Garcia, a 25-year-old dentist, said she fled to Colombia expecting to get a visa to enter the US in a matter of weeks. Instead, she and her husband have been waiting more than six months for a response, all the while renting a small room in a working-class neighborhood of Bogota for $200 a month and preparing for the birth of their first child in two months’ time.

“I’m worried about my baby. Where am I going to give birth and in what conditions?” said Garcia. “We’re in a state of limbo: without work, with little money and time running out.”

More than 50,000 Cuban health care professionals are working in some 66 nations as part of an international outreach program begun in the 1960s. The bulk work in Venezuela, which sends Cuba some 92,000 barrels of oil a day worth about $3.2 billion a year in exchange.

The 2006 US program is designed to deprive President Raul Castro’s communist government of an important source of foreign revenue. Cuba has not made public how much it pays doctors on foreign missions, though it is believed to be a small fraction of what it collects from the nations where they serve.

US Citizen and Immigration Services, which administers the program, didn’t immediately respond to a telephone message about the program

State Department spokesman John Kirby said this week that while Cubans regularly voice their concerns about the program it’s not part of bilateral talks taking place between the two governments and there are no plans to eliminate the program.

“It is not at all related to our new policy with respect to Cuba,” he said. “There’s no tie, no connection.”

Colombia’s migration authority said that 117 doctors are currently in the country processing visa requests with the US. A total of 720 have arrived this year, though 603 have been deported because they exceeded the 90-day safe-conduct granted by Colombian authorities so they could solicit a US visa.