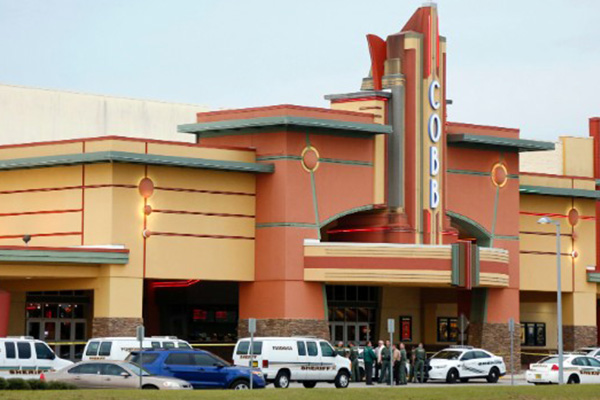 (CNN) — It started with a father sending text messages to his daughter during the previews of a movie.

It ended with the 43-year-old man shot dead amid the theater seats, and a 71-year-old retired police officer in custody. That man was set to make his first court appearance Tuesday.

Monday’s shooting during a 1:20 p.m. showing of “Lone Survivor” at a Wesley Chapel, Florida, movie theater escalated from an objection to cell phone use, to a series of arguments, to the sudden and deadly shooting, according to police and witnesses.

As a male moviegoer texted, the man seated behind him objected, and asked the texter to put his phone away.

They argued several times, according to police and witnesses, and the man who was texting watched as the other man walked out of the theater. Curtis Reeves, a retired police officer, apparently went seeking a theater employee to complain about the texting, police said.

Two seats away Charles Cummings and his son watched the squabbling.

When Reeves returned, he was without a manager.

The man who had been texting, Chad Oulson, got up and turned to Reeves to ask him if he had gone to tell on him for his texting. Oulson reportedly said, in effect: I was just sending a message to my young daughter.

Voices were raised. Popcorn was thrown. And then came something unimaginable — except maybe in a movie. A gunshot.

Oulson was fatally wounded. His wife was hit, too, through one of her hands as she raised it in front of her husband.

Oulson staggered and fell on them, Cummings said.

The shooter sat down and put the gun in his lap.

It happened that an off-duty deputy sheriff from Sumter County was among the 25 people theater at the Grove 16 complex. He rushed to the scene to make sure no more shots were fired and the shooter would stay put.

Two nurses were also there, and one came to Oulson’s side and performed CPR until paramedics arrived.

“I can’t believe people would bring a pistol to a movie,” said Cummings, a Vietnam veteran who had celebrating his birthday by going to a movie with his son.

CNN affiliate Bay News 9 reported that Reeves was arrested on a charge of second-degree homicide. It could not be determined whether he has retained an attorney.

Reeves retired in 1993 as a captain with the police department in nearby Tampa. He was also director of security at Busch Gardens until 2005, the station reported. Tampa police told CNN that Reeves was instrumental in establishing the department’s first Tactical Response Team.

A neighbor of Oulson’s told Bay News 9 that he was a nice guy.

“Always smiling. I’ve never seen him angry,” Bill Costas said. “If I needed help with something, he was always there.”

The shooting happened at about 1:30 p.m. inside one of the theaters at the Grove 16 complex, sheriff’s spokeswoman Melanie Snow said.

“This was an isolated altercation between two guests that escalated unexpectedly. The safety, security and comfort of our guests and team members are always our top priorities, and we are truly heartbroken by this incident,” Cobb Theatres, which operates the Grove complex, said in a statement.

A list of prohibited items and actions are on the theater website. Among them: no cell phone use, including texting, in the theater auditorium. And no weapons allowed.