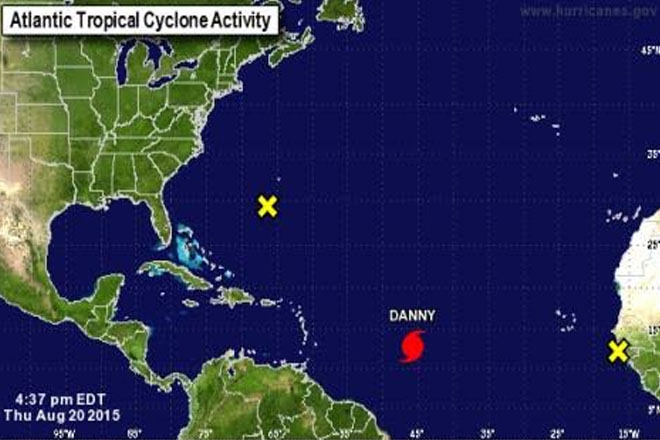 Miami, USA — Tropical cyclone Danny strengthened into the first hurricane of the 2015 Atlantic Hurricane Season on Thursday; however, its impact on the Caribbean remained uncertain.

According to the National Hurricane Center in Miami, at 5:00 pm EDT on Thursday, the centre of the small eye of Hurricane Danny was located about 1,030 miles (1,655 km) east of the Windward Islands, moving toward the west-northwest near 10 mph (17 km/h). This general motion is expected to continue into Saturday.

Maximum sustained winds have increased to near 80 mph (130 km/h), with higher gusts. Some additional strengthening is forecast during the next 24 hours, but a weakening trend is expected to begin after that.

There are currently no watches and warnings in effect.

“There is no data from the National Hurricane Center and the Weather Prediction Center because there is still a lot of uncertainty,” said NWS meteorologist Jay Alamo. “It is very difficult to forecast. The small size makes it susceptible to fluctuation both up and down.”

“Once the storm gets closer, on Saturday or Sunday, then we will have a better idea,” Alamo said.

However, with possibility of Hurricane Danny heading in the general direction of the US Virgin Islands, the Department of Licensing and Consumer Affairs (DLCA) said it will be monitoring businesses to ensure that prices for goods and services essential to storm preparation and recovery are reasonably priced.

In that regard, the department is encouraging consumers in the USVI to assist the agency by immediately reporting instances of suspected price gouging.

“Given the department’s current lack of manpower to monitor the hundreds of businesses in the Virgin Islands, it is critical that the consumer assist the department by acting as our eyes and ears to prevent the possibility of price gouging,” stated Commissioner Devin Carrington.

Based on the USVI Code, all businesses in the territory should have provided a mandated price list of goods and merchandise in stock at the beginning of the hurricane season, June 1, with additional lists due the first day of each month during the season. Upon the declaration of emergency by the governor regarding an imminent storm, prices submitted in the listing are frozen so as to prevent unreasonable price increases prior to, during and after the storm. Those prices remain frozen until the governor declares the emergency ended.

Meanwhile, forecasters are keeping an eye on two other Atlantic weather systems.

First, a surface trough interacting with an upper-level low is producing an area of showers and thunderstorms to the southeast through southwest of Bermuda. A non-tropical low pressure system is expected to form within this trough over the western Atlantic during the next day or two, and environmental conditions should support some subsequent tropical or subtropical development over the weekend while the disturbance moves slowly northward. The chances of formation of a cyclone are low (20 percent) through 48 hours and medium (60 percent) during the next five days.

Second, a tropical wave that has emerged off of the west coast of Africa several hundred miles southeast of the Cape Verde Islands is producing disorganized showers and thunderstorms. Environmental conditions are expected to become marginally favourable for some development of this system over the weekend and into early next week while the wave moves westward at 15 to 20 mph over the eastern tropical Atlantic. The chances of formation of a tropical cyclone are low (10 percent) through 48 hours and low (30 percent) during the next five days.