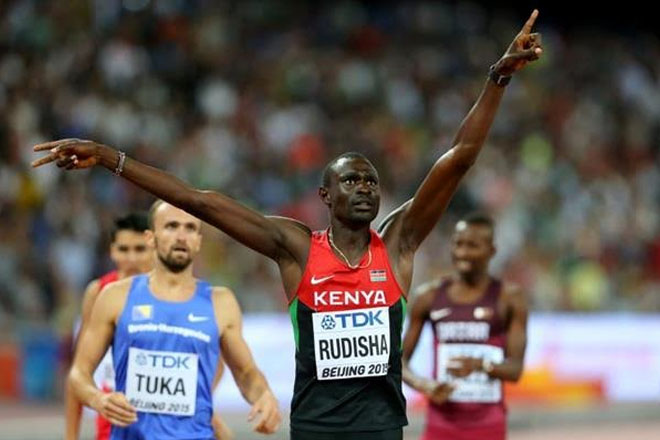 Sports Page — After the fourth day of competition at the IAAF World Championships, Beijing 2015, we’ve got the significant numbers of the day:

Number of gold medals won by Kenya in events shorter than 800m, before Nicholas Bett ran 47.79 to win the men’s 400m hurdles final.

Number of jumps by any other long jumper longer than any of Greg Rutherford’s.

Distance in metres between Denia Caballero’s first-round discus throw of 69.28m, which led throughout the competition, and Sandra Perkovic’s last-round throw of 67.39m, which moved her into second.

Seconds David Rudisha’s winning time in the men’s 800m was slower than that of his previous title in 2011.

Number of legal jumps Rutherford had in the men’s long jump final; also, the round in which his 8.29m mark took the lead and put the competition away. (Rutherford improved to 8.41m in the fourth round.)

Seconds the second half of Rudisha’s 800m final was faster than his first. Rudisha passed 400m in 54.17 and then turned on the speed on the second lap, by the homestretch simply running away from the field.

Place of Amel Tuka in the 800m final, winning the first ever World Championships medal for Bosnia and Herzegovina.

Number of athletes disqualified for lane violations across the seven heats of the men’s 200m, including Chinese athlete Xie Zhenye, who was celebrating a national record until he learned of his disqualification.

Years since the last 800m final with more than one non-African medalist; tonight’s second being Adam Kszczot of Poland

Bett’s lane number. Of the eight runners who advanced to the final, he had the slowest semi-final at 48.54.

Usain Bolt’s position among all 200m qualifiers in tonight’s first round. Bolt ran 20.28 to win the third of seven heats.

Age of world youth champion Abdul Hakim Sani Brown of Japan, who advanced to the 200m semi-finals with a 20.35 in the fourth heat.

Age of long jump bronze medalist Wang Jianan. He turns 19 on Thursday, making him the youngest-ever medallist in the event.

Approximate time in which Dibaba covered the last 800m of the race, a split only one woman (Eunice Sum) has beaten in an open 800m this year.