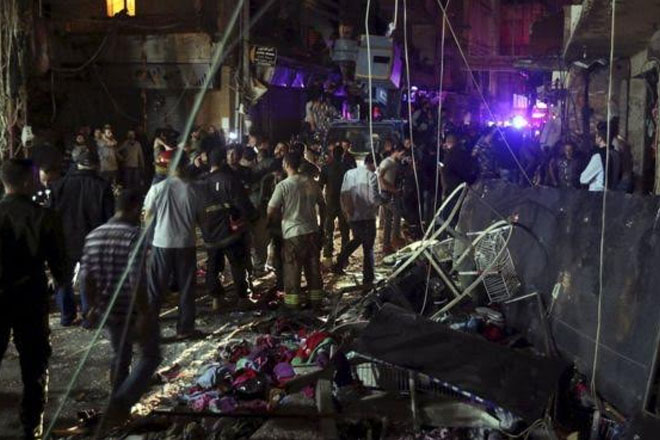 (BBC) At least 37 people have been killed and 181 injured in two explosions in the Lebanese capital Beirut, officials say.

The blasts hit the southern suburb of Burj el-Barajneh, a stronghold of the Shia Hezbollah movement.

The conflict in neighbouring Syria has worsened security and sectarian tensions in Lebanon. Southern Beirut has been targeted by Sunni militant groups in the past.

Hezbollah has fought alongside forces loyal to Syrian President Bashar al-Assad. Lebanese Sunni Muslims tend to back the Syrian opposition.

There was extensive damage to buildings around the site of the blast and bodies inside some of the nearby shops, AFP news agency reports.

There was blood on the streets, and security forces were trying to cordon off the scene and keep people from gathering.

Security officials were quoted as saying the body of a third suicide bomber who had not detonated his explosives was found at the site.

Syrian rebel groups including IS have also mounted attacks in Lebanon in recent years, but through it all the country has just about retained its fragile stability, the BBC’s Sebastian Usher reports.

After a relatively calm period, the scale of this attack will reawaken fears that Lebanon may yet fall victim to the Syrian quagmire, our correspondent adds.

Hezbollah has ministers in a unity cabinet formed last year to govern Lebanon after months of political deadlock.