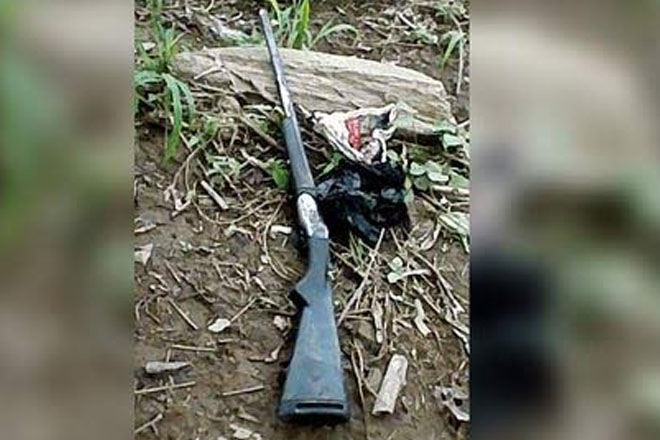 Port of Spain, Trinidad (Trinidad Express) — Their school vacation was supposed to be fun but it ended in tragedy after 10-year-old Reuben Reed was shot dead while playing with three friends yesterday.

He was shot in the chest by an 11-year-old boy after he and some friends found a shotgun in a garden in a forest, located off Richplain Road, Diego Martin.

Police said the incident occurred around 11.30 am.

Reed, along with the three other boys, had picked his way approximately half a mile through a heavily forested area to a garden where cane, corn and pigeon peas are planted. Police also found a small number of marijuana plants.

The garden, which offers a commanding view of the Diego Martin Valley, is located on a steep hill which was cleared to plant the crops.

Beyond the garden is a large mango tree, beneath which two galvanised iron sheets lay on top of a long barrelled shotgun.

He then squeezed the trigger and the gun discharged. Police said he was thrown back with the recoil.

Reed, who lived with his parents in Upper Rich Plain Road, Diego Martin, and was a pupil of Diego Martin Boys’ RC Primary School, was shot directly in his chest and died instantly.

Another boy was grazed on his face while another was unharmed.

The three boys then ran off to tell someone what happened, and around 1 p.m., the police were notified.

The boy who sustained the graze to his face was taken to the Port of Spain General Hospital.

A team of officers from the Western Division’s Rapid Response Unit responded and amid yesterday afternoon’s heavy rains, they went into the forest and found the 10-year-old’s body lying on the ground, with the shotgun near to it.

After police secured the scene, they radioed their colleagues from the Homicide Bureau and the Crime Scene Unit, who later arrived and began picking up bits of evidence and photographing the area.

The boy’s mother did not come to see her son’s body but was taken to the West End Police Station where she gave investigators a statement.

The boy’s father however arrived on the scene. Police said they were pained to show him his son’s body.

The Express also saw when the father bent down, placed his head in his hands and appeared to be crying.

He later told reporters: “This is carelessness. How he (the assumed gun owner) could leave the ammunition out there for the children to reach it. I am not blaming anybody, eh.”

He said Reuben was the last of his eight children.

“He was a very intelligent young man who loved sports,” he said.

Another man, who appeared to be in his 70s, arrived in the garden as well.

As he saw one of the children, he immediately began asking them what happened.

A police corporal approached him, saying: “It have time for that boss…but not now.”