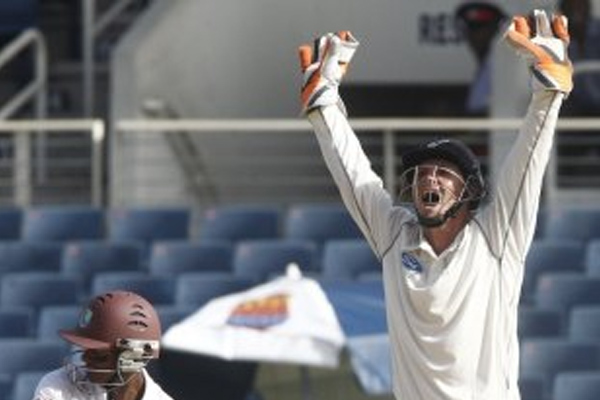 Sports Page — Tim Southee and offspinner Mark Craig demolished West Indies for the second time in successive days at Sabina Park to record New Zealand’s second Test win in the Caribbean. Craig took four wickets in the final innings to finish with 8 for 188 in the Test, the best match haul by a New Zealand debutant.

West Indies were left to reflect on another abject batting performance. Their second-innings total of 216 was inflated by an 82-run stand for the last wicket between Sulieman Benn and Shane Shillingford, who swung merrily to score the second fastest Test fifty in terms of balls recorded. It only delayed the inevitable defeat.

After West Indies had been set 403 to win, Chris Gayle began the chase with two boundaries in the first over, from Trent Boult, becoming the eighth West Indian to pass 7000 Test runs. He then watched Tom Latham move lithely at short midwicket, diving forward to catch a low flick from Kieran Powell, giving Southee a wicket in his first over. In his second, Southee pitched a delivery on a good length around off and angled the ball away from Gayle. It was a delivery he had beaten Gayle with umpteen times in the first innings before finally hitting the edge. He did not have to wait at all this time. Gayle prodded from his crease with poor footwork and edged a low catch to the wicketkeeper BJ Watling, leaving West Indies on 11 for 2.

West Indies’ slump took a break for tea and then resumed unabated. Brendon McCullum brought on Craig in the 12th over and the offspinner struck with his second ball, dismissing Kirk Edwards for the second time in the Test, caught at leg gully after the batsman pushed forward too early. New Zealand’s fielding and catching had made West Indies’ efforts in the field look lethargic all through the Test, and two outstanding catches gave Craig two more wickets in the space of three balls. The wicketkeeper BJ Watling adjusted to the high bounce of an offbreak and caught the outside edge from Darren Bravo near his shoulder, and Latham dived quickly to his left at short leg to hold an inside edge from Marlon Samuels, who bagged his second two-ball duck of the Test. West Indies were 55 for 4.

Shivnarine Chanderpaul and Denesh Ramdin began to form a partnership but there was a sense of futility to their efforts, given the magnitude of the task ahead. Unlike in the first innings, when Chanderpaul was solid all through his unbeaten 84, he played shots and edged a couple of his early deliveries. And when he padded up to the legspinner Ish Sodhi, and the New Zealanders went up in prolonged appeal, umpire Rod Tucker gave him lbw. It was a marginal decision, because Chanderpaul had taken a long stride forward and the ball was turning big, but replays predicted it would have clipped the top of leg stump. A broken innings now lay shattered.

It was left to the new West Indian captain, Ramdin, to avert a four-day defeat, but when he missed a slog sweep and was bowled by Sodhi not long before stumps, New Zealand took the 30-minute extension to knock over the tail. What seemed a certain four-day finish, however, began to seem unlikely as Shillingford and Benn frustrated the bowlers with free-spirited, no-pressure hitting. One over remained in the day, and McCullum gave it to Kane Williamson. He needed four balls to have Benn caught behind; Watling capping a phenomenal match behind the stumps.

Before their batsmen failed for the second time in the Test, West Indies’ bowlers had produced a much-improved performance to slow New Zealand’s attempt to build on an overnight lead of 260. In the second over of the day, Jerome Taylor hit the back pads of nightwatchman Sodhi and Ross Taylor with consecutive deliveries. Both were dead lbw.

Ramdin brought on his spinners from the 10th over of the day, and while Benn was economical, Shillingford took a while to find a good length. Once he began to toss it up fuller, he became more effective, and eventually spun one through McCullum’s defence. New Zealand were 55 for 5 at that point.

Jimmy Neesham came out and played with the fluency that had brought him his first-innings century, and even charged Shillingford to hit him over the straight boundary. West Indies could have had Latham’s wicket had they reviewed an lbw appeal from Benn that was turned down. He was on 25 at the time, and gave West Indies no more chances.

New Zealand were slow in the first half hour after lunch, scoring only five runs. The partnership for the sixth wicket had grown slowly to 63 when Neesham miscued a loft against Shillingford and holed out to long-on.

The tempo picked up after Watling joined Latham. The batsmen rotated strike almost every other ball and Watling went on the offensive straightaway, sweeping and cutting Samuels for boundaries. In the first over after drinks, Latham played an uncharacteristically flamboyant drive and was caught at slip for 73, the first sign that the declaration was near.

Craig clobbered his first ball in Test cricket over the long-on boundary, and moments later McCullum called his troops in. He had given his team a little over four sessions to bowl West Indies out, a little over three if they wanted to watch the first match of the football World Cup, and a little over two if they wanted to catch the opening ceremony as well. Southee, Craig and Sodhi needed less time than that.