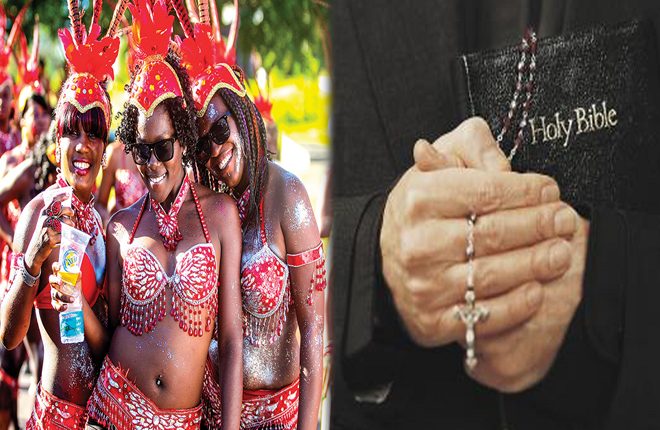 (SKNIS): In St. Kitts, the religious season of Christmas and the secular festival of Carnival overlap. Some believe that Carnival should be moved to another time of the year because it overshadows the sacred time that Christmas should signify.

However, Director of Culture, Troy Mills, appearing on the radio and television programme “Working for You” on January 11, said that the Department of Culture, cognizant that Christmas and Carnival take place simultaneously, continues to attempt in striking a balance between the secular and religious festivals during the festive period of December/January. Mr. Mills said the department is very mindful of the need to maintain Christ in Christmas during the Carnival celebrations.

“If you look at Christmas, break it down into two words, Christ-Mas…. there is some discussion that Carnival should be moved to some other part, but when you look at it, if you take the Christ out of Christmas, you have ‘Mas,’”. Mr. Mills explained by showing the correlation between the two festivals. He said that for the last 19 years, the Department of Culture has been organizing and hosting “In the Spirit of Christmas”—four nights of performances of Christmas music, songs, poetry, drama and prayer at The Circus in Basseterre. This occurs during the first week of December, which Mr. Mills said is not only about promoting the Christmas spirit, but also to ensure that the Christmas celebrations remain relevant during carnival.

“It really gives the family an opportunity to come out and enjoy some Christmas music,” Mr. Mills said.

Also, as a Christian society, many persons traditionally flock to church on Christmas Eve and Christmas Day in recognition of the Birth of the Holy One of Israel, which in the Christian calendar is celebrated on December 25. On New Year’s Eve and New Year’s Day, many persons congregate at various churches on the island to receive their blessing at the end of the year and the start of a new year.

Meanwhile, the director explained that the Department of Culture wants to expand into more areas of culture other than the performing arts.

“We have to expand that. We have to get somebody on board to deal with the culinary elements of it, the visual arts element of it, as well as the literary,” he said. “Our role really is to work through the schools with the assistance of the Ministry of Education and through the communities.”

He added that the department has done work with the primary and high schools and was approached last November by a pre-school to help teach folklore to the children.

“Hence, we are able to shape and encourage, direct…the attitudes, the values of the young people so when they grow up they continue developing in these good values and when they leave school, they take it into the community, and over a period of time we (will) have a better society, a better country,” Director Mills said.