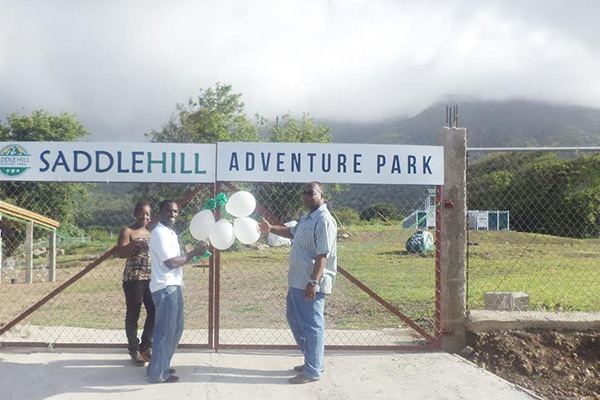 Basseterre, St. Kitts — He was pregnant with ideas, but his age and lack of experience were a hindrance. The boy who grew up on the western slopes of Mt Liamuiga had a dream that one day he would share the thrills of mountain slope life with others, but was rebuffed by those he approached for financing of his dream project.

One known never to give up, the young man’s woes came to a screeching halt when he visited the Development Bank of St. Kitts and Nevis, which listened to him on an equal footing and ended up making his dream come true.

A born leader, Calvin Mason was involved in different community groups while growing up in Saddlers Village, and when he joined the University of the West Indies in Jamaica to study Banking and Finance, his leadership qualities were easily recognised as he became the President of the St. Kitts and Nevis Association and also Chairman of Chancellor Hall.

After finishing with the university, he returned home and worked with the Ministry of Finance, but while there, the experience in the different activities he had gained in Jamaica and his inbuilt adventurous nature made his mind gravitate towards doing something that would encompass outdoor life to involve both locals and tourists.

“So I started brainstorming and putting ideas together as to what I could put into a business idea,” said Mr Mason in a recent interview. “I realised that the tourist market was booming and it was a good opportunity to get into the tourist market, and they like adventure stuff and so that is how the whole idea came about.”

Today he is a proud entrepreneur, being the CEO of the now much acclaimed Saddle Hill Adventure Park in Saddlers. The project is a success, but the road towards achieving his dream was a treacherous one.

“I started putting in the plans and the whole idea together in 2011,” recalls Mr Mason. “I actually tried different sources to get funding. I tried at least three different banks in St. Kitts, or four including the Development Bank.

“I approached all of them and the response from the others they were not as positive because, I being a young man without much capital it was very difficult to give me funding, but with the idea I approached Development Bank and the persons at Development Bank loved the idea and felt it was a good initiative and they decided to assist me with it.”

Mr Shavon Douglas, head of Business Support Unit at the Development Bank of St. Kitts and Nevis, in explaining why the institution funded the Saddle Hill Adventure Park project noted that Mr Mason was a university graduate with a degree in finance and they were comfortable in the fact that he would be capable of handling such an undertaking.

“The project once successful helps to diversify the tourism product being offered in the Federation and can also double as an attraction for local entertainment,” observes Mr Douglas.

“We also looked at the fact that the project, upon completion, would create employment and other spinoff economic benefits both in the Saddlers community and on a national scale.”

Mr Mason recalls that he received funding from the Development Bank in 2012 around November/December and the park was completed last year June, with its grand opening on June 15, and started its operations with a bang as locals quickly embraced it. The park is on two acres of land that are leased from the White Gate Development Corporation.

The Park has different activities one could partake in, including a nature trail which is a fifteen minute walk in the area around the park. Inside the park itself patrons can play laser tagging; there is an artificial rock climbing wall; a human maze and a giant swing better known as the ‘giant screamer’.

“It is basically a giant swing that pulls you up and swings you back and forth,” explained Mason. “Trust me; you get a good scream out of it. The ideas came basically from being overseas and being exposed to different outdoor activities.”

The Park has a children’s playground with a swing and seesaw that keeps children as well as adults fully occupied. Additionally the park has a team building challenge course with land ski for teams to participate in, a tyre run as well as a balance beam.

“For persons out there, I would encourage them to think outside the box,” said Mr Mason in his advice to young people desirous of setting up businesses.  “Think about things that are feasible, feasible business ideas, put them together, get your plan, properly organised and you approach the Development Bank because they are there to assist and help entrepreneurs in St. Kitts.

“They are looking towards assisting especially young persons who have gone to further their education and have come back and want to start something. I would encourage them to go out and be creative, approach the Development Bank and sell your idea and always believe, do not give up. As difficult as it might be, continue pushing because the road for me to get in where I am wasn’t easy at all.”

Nodding in agreement, Business Support Officer at the Development Bank of St. Kitts and Nevis who has responsibility to oversee the Saddle Hill Adventure Park project, Ms Jasmine Primus said: “At the Development Bank we look at the dream the person has, as in most cases these are viable ideas that could be useful to the country.”

Now into its seventh month of operation, Mr Shavon Douglas says: “The entrepreneur has met the very same economic and social responsibilities that we were looking for. The business has created employment, as at this stage it now has some five persons working with him.”