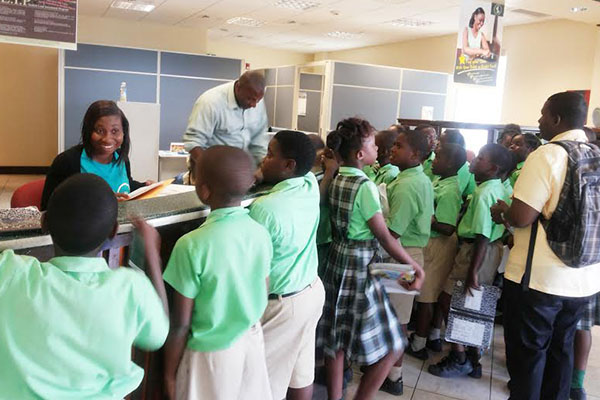 Basseterre, St. Kitts — Grade Four pupils at the Tucker Clarke Primary School in Newtown, Basseterre, were out Friday (March 7) on a fact finding mission that left an official of the Development Bank of St. Kitts and Nevis amazed at their grasp of financial issues.

The pupils came to the Development Bank during the morning section and when they got in, they were received by Mr Patrice Ward, Credit Risk Management Officer, who entertained their questions and gave them answers and also told them about a new product that was recently launched by the bank that would cater for their future education.

According to their teacher, Mr Justin Herbert, they were visiting financial institutions around Basseterre for the children to know exactly what banks are all about. The children went into the bank in two batches led by Mr Herbert, while two teachers Ms Kester Pemberton and Ms Sherima Collins were outside observing the other group.

“They were asking what we are doing here as a business,” said Mr Ward. “I explained to them it is a bank, and that we provide financing for housing, student loans, agriculture, consumer loans and also for small businesses.

“They asked up to how much we would lend and I explained it is based on a person’s income and trying to find what kind of business if it is to generate enough money…. we would provide the amount based on how much the evidence is there as to how much they can afford to pay back.”

After he said that a loan repayment plan is part of the whole process, a young girl, Athalia Pencheon asked him: “You do not take all the people money?”

“We try not to take more than 45 percent of the person’s income because we have to let them to be comfortable so they can pay other things like electricity, buy food, and take care of other household items and be left with some for saving,” Mr Ward informed the girl.

J’Saih Foster then posed: “If you take more than 45 percent of the person’s income, what gonna happen? So that is basically saying that the person will be homeless?”

Mr Ward told the young boy that was the reason the Bank would not take more than 45 percent because if that happens such a person would have difficulty in paying for electricity, buying food, saving and also taking care of other family obligations and that was not the Bank’s wish.

“The person must be in a position where they can pay us back comfortably and live comfortably while paying other things, so we do not want to take too much of the salary, we just want them to be able to pursue their goal and be comfortable,” Mr Ward advised the pupils.

More pupils had their hands raised wanting to ask questions but Teacher Herbert signalled that their time was over and they left the bank’s lobby in an orderly fashion.

“They were very knowledgeable and wise to ask such questions considering they are in grade four,” said Mr Ward. “It shows that the teachers are doing a good job for these children to be at the top of the game at such an early age and we at Development Bank congratulate the teachers for doing such a marvellous job.”

Mr Ward also told them about the Student Loan Investment Programme (SLIP) a product that was launched by the Development Bank of St. Kitts and Nevis last year that would assist parents and guardians to invest in their children future education.

According to Mr Ward, SLIP is an investment product for future students where a parent could open an account at the Development Bank for the child from as young as birth. The account has an attractive rate of interest and by the time the child is ready to go college, enough money would have accumulated, and if they need additional funds, it would be easier than if one did not have a SLIP account.