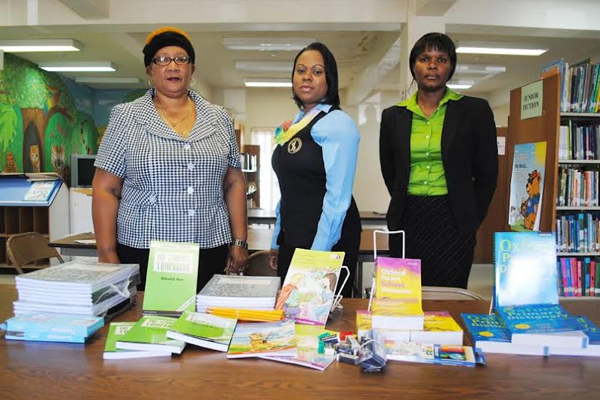 Basseterre, St. Kitts — Thirty-five budding young readers from the various primary schools on the island of St. Kitts are at the Charles A. Halbert Public Library in Basseterre taking part in the annual Easter Read-A-Thon which this year has received support from the Development Bank of St. Kitts and Nevis.

According to the coordinator of the event, Assistant Librarian Mrs Carmen Browne, the primary school participants reported on Monday April 7 where they had prominent Kittitian author, Mr Loughlin Tatem, and retired educator Mrs Dorothy Martin as presenters.

“Mr Loughlin Tatem, who has recently released a poetry book talked to the children and he encouraged them to read,” said Mrs Browne. “He dwelt on the importance of reading, and told them what encouraged him to write. He actually motivated them and he had them engaged in book activities.

“Mrs Dorothy Martin told stories to the children and she basically encouraged them to read by showing them the importance of reading and why they should read. She did an excellent job and she had the children engaged. She had them answering and even though she is a retired teacher she still had their attention.”

Presenter on Tuesday was Ms Constance Richardson, a retired educationist who spoke to the participants about poetry and even read some poems to them. When the children started reading their own poems, Ms Richardson guided them on how to use gestures when delivering the poem.

The event is expected to come to an end on Thursday April 17, and according to Mrs Browne, two of the past winners from the Easter Read-A-Thon, Mr Ivor Carr who won in 1996, and Mr Akeem Bacchus who won in 2001, will be special guests at the closing ceremony where awards will be given to the winners.

The Library had earlier approached the Development Bank of St. Kitts and Nevis with the request that it sponsors the event by donating some of the items that will be given as prizes to the winners. Their request was honoured and the prize items were presented by Ms Danienne Brin, the bank’s Manager for Human Resources, Marketing and Product Development.

“I have never sent a letter to the Development Bank before,” explained Mrs Browne. “I did and you were the first to call and responded and said that you are going to sponsor the programme, and I was very excited to know that.

“What I realise is that you do not sponsor only one institution, you sponsor everybody and you have always been doing that. You guys are doing an excellent job; you are actually developing the country.”

She informed Ms Brin that the Easter Read-A-Thon is one of the library’s outreach programmes, which has been held for the past seventeen years for children ages 7-12. The children are encouraged to read as many books as possible, after which they are asked questions from each of the books and the person who would have read the most books and answers the most questions is designated the winner.

“We have a junior winner and we have a senior winner,” explained Mrs Browne. “The junior winner is from category seven years to nine and the senior category is from ten to twelve years. We target those in primary schools specifically.”

Ms Danienne Brin congratulated the library saying that it helps children to realise how important reading is because these days everything is technology based and so much digitised and it takes children’s attention from the written word.

“Some time we have to go back to the old school,” noted Ms Brin. “Reading is important and it should not be sidelined because we have technology at our disposal. Yes, we understand that technology is important now but it has to be a combination of both to make a child well rounded.”

Librarian, Ms Carrolyn Henry, who was present when the donation was made, explained that for the winner there is a trophy. Donations received from well wishers are given to the other winners in the two categories, and with the donation from the Development Bank, everyone will get a prize this year.

“Apart from just reading, we encourage them to join the library because when they are members they are able to take three books, as opposed to just one by non-members,” explained Ms Henry. “That is an advantage they have over regular children. Not everybody who joins the library would make it a habit but we still try to encourage them to read.”