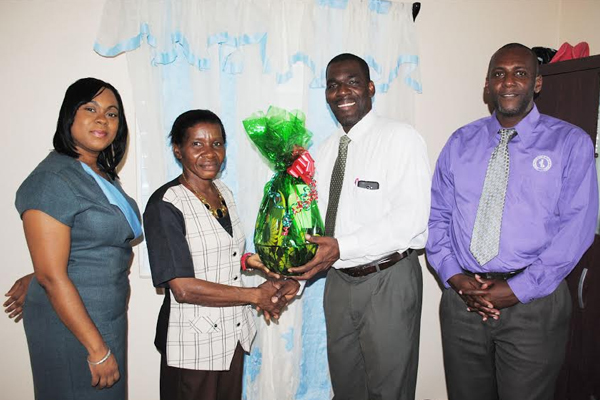 “We sat down and we realised that owning a house is a big milestone for a person especially if they have passed the other milestones like higher education; they might already have a vehicle, and this is the next normal step for any responsible person,” explained Mr Carlton Pogson, Acting General Manager, Development Bank of St. Kitts and Nevis.

Recognising the importance of that milestone, and more so for those moving into their new homes during the Christmas season, the Development Bank saw it as a double celebration, and hence the need to honour them by presenting them with ‘house-warming’ tokens to acknowledge that the Development Bank appreciated their business.

“We decided to let them get a little token from us to show that we value and appreciate their business and we congratulated them for owning their own homes,” explained Mr Pogson. “First it was Christmas time, and this was our way of giving back to the community as well.

“The basket of token had a bottle of wine they could sit down on their veranda and sip a glass of wine just to celebrate, and also some household stuff as we visited a lot of the houses and most of the kitchens are fabulous so the stuff that we put in the basket is going to be a great addition to the kitchens that we visited.”

The first to receive the tokens were Ms Joycelyn Clarke of Brick Kiln and Ms Anesta Maynard of Hanley’s Road Gingerland in Nevis. Their tokens were delivered by Ms Danienne Brin, Manager Human Resources, Marketing and Product Development who was in the company of Mr Laurinston Matthew, MIS Manager, and Ms Hyacinth Pemberton Manager of the Nevis Branch.

Ms Joycelyn Clarke who is originally from Cayon in St. Kitts has lived in Brick Kiln for more than 18 years. She thanked the Development Bank for enabling her to own her own home, which has two bedrooms and a fantastic view of the Atlantic Ocean. She observed that when she approached the bank, she was very well treated.

“Anyone out there looking for a bank, the best bank to go to, with my experience, is the Development Bank of St. Kitts and Nevis,” said Ms Clarke. “No problem whatsoever, I got my loan and they helped me through the steps. I really, really appreciate Ms Hyacinth Pemberton and Mr Colville Morton for having assisted me to go through that process.”

Proud owner of a three-bedroom house, Ms Anesta Maynard told how it took more time for her to get legal documents to have her name attached to the land title, but once that was done and she went to the Development Bank of St. Kitts and Nevis, the turn-around time was breath-taking.

“The turn-around time was excellent,” said Ms Maynard. “They came to check a couple of times on the progress and they have been very welcoming when I go to the bank. They are very friendly and I have to give a big mention to Mr Colville Morton, he kept the process very smooth and made work easy for me.”

Mr Carlton Pogson, the Acting General Manager, led the team that visited Mrs Esther Hodge at Buckley’s Estate who had received a loan to build an extension to her existing house. She told them that the loan was the third at the bank.

“We are thanking you for choosing us as your bank,” said Mr Pogson who was accompanied by Ms Danienne Brin, and Mr Patrice Ward, Credit Risk Management Unit Manager. “We are happy we were able to partner with you, that your dream can become a reality and you and your family can have an awesome home for Christmas.”

Next to be visited was Mrs Naomi Byron of Buckley’s Housing Development and whose token was presented by Ms Brin who was accompanied by Mr Ward. Ms Brin explained to Mrs Byron that at the Development Bank they understood the challenges and the stress that accompany the construction of a home, and congratulated her for overcoming all those and to be a proud homeowner.

Mrs Byron explained how pleased she was as the loan process proceeded on smoothly at the bank and that when construction work took off she experienced a major hiccup, “but Mr Pogson really intervened and assisted with it and everybody else from there on has been really good and helpful. I consider them family.”

Final stop by Ms Brin and Mr Ward was at Stone Fort Heights Extension, where Ms Yvonne Rodgers told them how she shopped around among the banks in the Federation and was happy when the Development Bank responded positively and has since worked with her to ensure that she has her dream home.

“I wanted to have something I could call my own,” said Ms Rogers. “My mum has her own house, I wanted to do the same and be independent and if in the future I have a family I do not have to depend on anybody.

“I was shopping around, and those who I went to were giving me issues and challenges and so I went to Development Bank and asked if I could have an appointment and I sat with Mr Patrice Ward first, and then he transferred me to someone else and it was successful. I would recommend my friends who want to own homes to go to the Development Bank because Development Bank is easy to work with.”