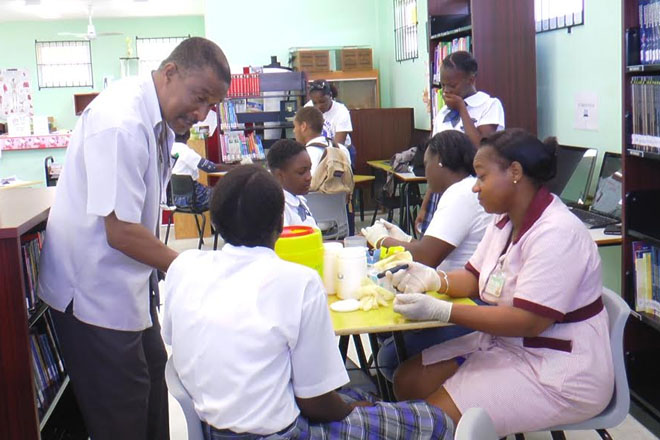 Dozens of students lined the hallways of the Saddlers Secondary School with their consent forms as they patiently waited to be tested.

In an effort to fight diabetes and reduce the frequency of serious complications, the St. Kitts Diabetes Association continued its routine screening exercises

President of the Association, Christine Wattley explained why the screenings were necessary.

“We as an association working in collaboration with the Ministry of Health, we decided that we would screen some students at one of the high schools in St. Kitts and that is one of the high schools where we have been doing some work with the children. We had about three, four or five children with Type 1 diabetes. In screening those children, we found that there was a very high number of them who were overweight and had very high levels of blood sugar and so the aim for doing this is to earlier detect diabetes in children”, Wattley, also nurse by profession explained.

Nutrition Surveillance Coordinator from the Ministry of Health, Latoya Duncan said obesity is a common risk factor seen among the students that is becoming a growing concern.

“Risk factors we are seeing with school aged children who usually have diabetes or who are pre-diabetic is that they usually are overweight. They suffer from obesity which is now a condition just like diabetes and hypertension. Obesity is now a condition. Usually that is due to physical inactivity,” she said.

“They do not exercise enough and they do not do enough physical activity and then they tend to consume high caloric foods. As a nutritionist we are hoping to get the message across for some children to start doing some more physical activities, for them to start consuming more vegetables and more fruits and to also limit how often they consume high caloric foods”, the nutritionist added.

The Saddlers Secondary School was number 3 on the list of completed screening visits.