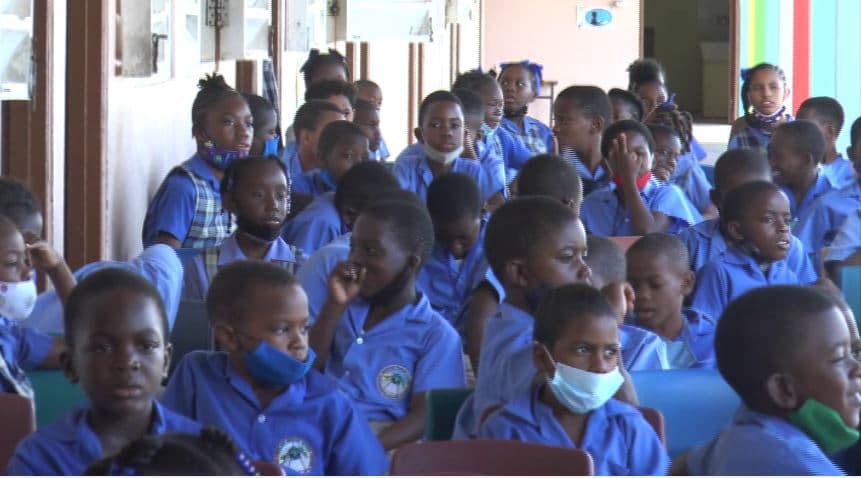 Basseterre, St. Kitts, January 25 2021 (ZIZ News)The Dieppe Bay Primary School celebrated its 25th anniversary of relocating from the Old Methodist Church Hall to a new building in a ceremony at the school on Monday.

Former teacher and Principal of the Dieppe Bay Primary School, Carrolyn Henry explained that moving to a new building and receiving her own classroom was a joy after sharing a hall with other classes.

“We were sharing an open hall everybody had to compete for their children to hear what they were saying. For me it was very exciting, it was beyond excitement because at last I would have my own classroom where I didn’t have to compete with everybody else to be heard….So being in a new environment with my own classroom was a joy.”

Parliamentary Representative for Constituency #6, Rt. Hon. Dr. Denzil Douglas extended commendations and congratulations to the staff, parents and the community of Dieppe Bay and Parsons.

The high point of the ceremony came when 25 balloons were released into the air by the students to signify the 25 years of the relocation and the past and present achievements of the school.

Other activities to commemorate the 25th anniversary include Celebrating with students who are making their 25th birthday this year, Honouring 25 Remarkable Valedictorians – Installing a Wall of Fame, Recognizing the School’s TOP 25 Qualities, Know Your School Competition and a Health Walk.