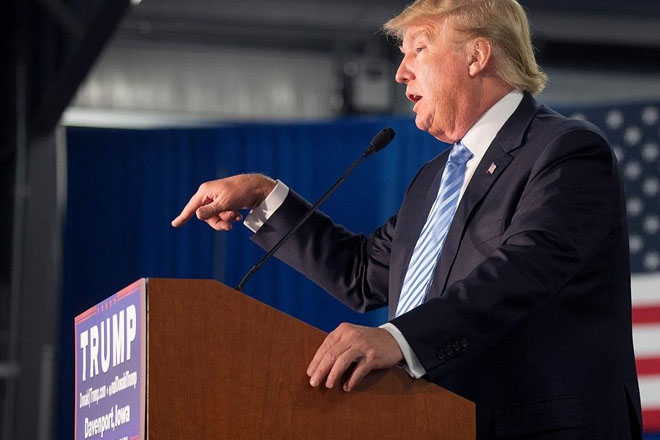 (BBC) There has been a storm of condemnation from Donald Trump’s fellow Republicans after the presidential candidate called for a ban on Muslims entering the US.

Rival candidate Jeb Bush called Mr Trump “unhinged”. Former US Vice-President Dick Cheney said it “goes against everything we stand for and believe in”.

Mr Trump said many Muslims nursed a “hatred” towards America.

In a campaign statement, he called for “a total and complete shutdown of Muslims entering the United States until our country’s representatives can figure out what is going on”.

His campaign manager said that would apply to “everybody” – would-be immigrants and tourists. But Mr Trump told Fox News it would “not apply to people living in the country”, adding that Muslims serving in the US military would “come home”.

Mr Trump’s statement was delivered as the US comes to terms with its deadliest terror attack since 9/11.

Last week a Muslim couple, believed to have been radicalised, opened fire and killed 14 people at a health centre in San Bernardino.

Mr Trump garnered loud cheers when he repeated his ban pledge at a South Carolina rally hours after his initial statement.

Some of his Republican rivals – mindful, perhaps, that Mr Trump’s more outlandish proposals only appear to have bolstered his poll ratings – were more nuanced in their responses.

Carly Fiorina used her response to take simultaneous aim at President Barack Obama, saying his “overreaction is as dangerous as President Obama’s under-reaction” – while Ted Cruz said: “Well, that is not my policy.”

Ben Carson said visitors to the US should be monitored, but added: “I do not and would not advocate being selective on one’s religion.”

The BBC’s Anthony Zurcher, in Washington, says Mr Trump, whose poll ratings have risen after other hardline statements, has set down a marker that will force his fellow candidates to stand with him or risk his ire.

Mr Trump’s comments were contrary to US values and its national security interests, a statement from the White House said.

“Donald Trump sounds more like a leader of a lynch mob than a great nation like ours,” said Nihad Awad, national executive director of the Council on American-Islamic Relations.

“These are not just words… Trump and Carson’s mainstreaming of Islamophobia in the election is inciting discrimination, hate crimes, violent attacks against Muslims and mosques. This inflammatory rhetoric is putting the lives of millions of American Muslims and their children in danger.”

“We’re entering into the realm of the fascist now,” said Ibraham Hooper, director of the Council on American-Islamic Relations.