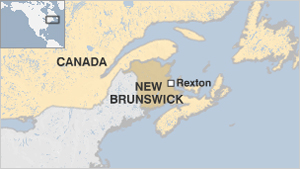 (BBC) At least 40 people were arrested after a protest at a shale gas development in the Canadian province of New Brunswick turned violent, say police.

A shot was fired, petrol bombs were tossed and police cars torched at the blockade near the town of Rexton.

The Royal Canadian Mounted Police said arrests were made for firearms violations, threats and intimidation.

Protesters have blockaded a staging area where an energy firm stores its equipment since 30 September.

Violence erupted as officers moved in to enforce a court injunction won by the company to remove the protesters’ highway camp, said police.

Royal Canadian Mounted Police (RCMP) officials say at least five of their vehicles were set on fire and destroyed, Molotov cocktails were hurled at officers, and at least one shot was fired by someone who was not a police officer.

The reserves are removed from the ground by a controversial practice known as hydraulic fracturing, or fracking.

Opponents of the shale gas sector say drinking water can be polluted during this extraction process.

“There have been threats made to employees who were working with a private security firm at the site, as well as firearms offences, incidents of intimidation, mischief and other criminal behaviour,” RCMP spokeswoman Constable Jullie Rogers-Marsh said in a statement.

“For those reasons, and to ensure public safety, police action was required.”

Among those arrested on Thursday were members of the Elsipogtog First Nation, including their Chief, Arren Sock, Canadian media reported.

Former Elsipogtog chief Susan Levi-Peters told the Globe and Mail newspaper the RCMP vehicles had been set on fire after Mr Sock and several other tribal members were arrested while trying to intervene.

A councillor from the Elsipogtog First Nation told the Canadian Press news agency that police had used pepper spray on the protesters.

“They sprayed the crowd that was there,” Robert Levi said. “The chief was manhandled a little bit and all hell broke loose.”

He added the protesters would try to stay, despite the injunction.

“This is what our people have been fighting for,” Mr Levi said.