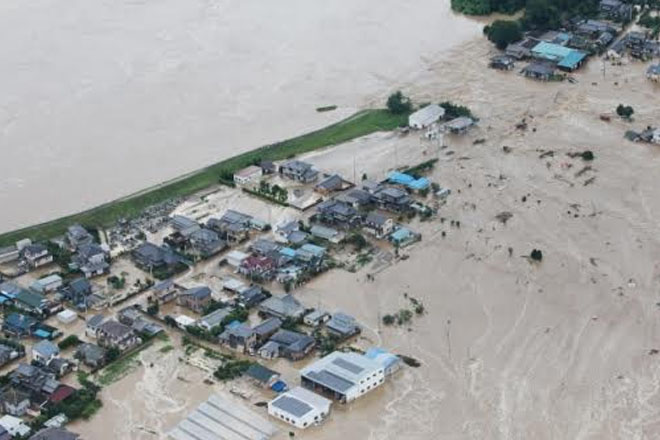 Joso City, Japan (AFP) — Dozens of people were trapped in buildings and several were missing after powerful floods ripped through parts of Japan Thursday, in the wake of torrential rains.

Military helicopters plucked stranded residents from roofs after waters surged over a wide area when a river burst its banks, swamping a city of 65,000 people.

Dramatic aerial footage showed whole houses being swept away by raging torrents, in scenes eerily reminiscent of the devastating tsunami that crushed Japan’s northeast coast in 2011.

One man was seen clutching a concrete post as waters swirled around him.

No one had so far been confirmed dead, but there were reports of people missing, including in landslides that buried buildings.

“Please continue to ask for help. Please don’t give up hope,” an anchorman for public broadcaster NHK told trapped viewers.

More than 100,000 people were ordered to leave their homes after a huge swathe of northeast Japan was battered by torrential rain, with up to 60 centimetres (two feet) falling in some places.

“My house is on higher ground but I’m worried the water may reach it tonight.”

The floods brought confusion, and several people are reportedly missing — including one in Joso — but authorities said they were unable to confirm the total number unaccounted for.

But an estimated 200 people were still trapped in their homes or other buildings, including a day care centre and a seniors’ home, Jiji said.

Joso is about 60 kilometres (37 miles) outside Tokyo, which has also been hit by localised flooding.

The rains came in the wake of Typhoon Etau, which smashed through Japan on Wednesday, bringing strong winds and causing travel chaos.

Flooding complicated a contaminated water problem at the crippled Fukushima nuclear plant, where the site’s drainage pumps were overwhelmed, sending radiation-tainted water into the ocean, a spokesman for operator Tokyo Electric Power said.

“This is a scale of downpour that we have not experienced before,” forecaster Takuya Deshimaru told an emergency press conference.

Prime Minister Shinzo Abe said the government was on high alert, and vowed to put the “highest priority” on saving people’s lives.

Two men were missing in Nikko, a city known for its historic shrines, after possibly being buried by landslides, public broadcaster NHK said.

Two other men in Nikko were rescued after being swept into a drainage gutter, but one was unconscious, the broadcaster said.

Forecasters from the Japan Meteorological Agency had issued special warnings urging vigilance against mudslides and flooding in Joso and other parts of Ibaraki prefecture, with 20,000 people told to seek shelter.

In neighbouring Tochigi, authorities ordered more than 90,000 people to evacuate, while another 116,000 were advised to leave their homes, public broadcaster NHK said.

“We know the damage is extensive and affected wide areas,” an Ibaraki official told AFP.

In Tochigi’s Kanuma city, an official said rescuers were searching for a missing person believed to be buried in mudslides.

NHK reported it was a woman in her 60s buried after mudslides destroyed houses.

Etau, which smashed into Japan on Wednesday, moved out into the Sea of Japan (East Sea) by the end of the day, but a wall of rain continued to lash the country.

More than a dozen people were injured, including a 77-year-old woman who broke her leg after falling in strong winds, local reports said.

Japan is no stranger to natural disasters, and is frequently rocked by typhoons.

However, nothing in recent memory has compared with the tsunami of 2011, when more than 18,000 people were killed.