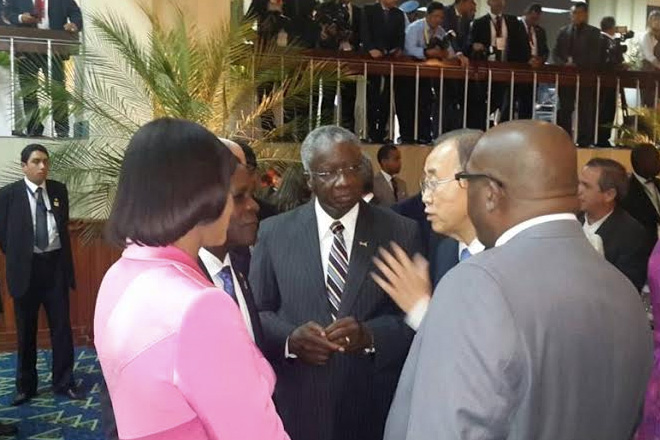 (ZIZ News) — Friday was a historic day in the Summit of the Americas when, for the first time, a US President and a Cuban President shook hands. On Saturday, they met to discuss matters of common interest to the nations of the western hemisphere.

St. Kitts and Nevis’ Prime Minister, Hon. Dr. Timothy Harris said he was delighted to have witnessed President Obama and President Castro greet each other, signifying a warming of the relationship between both nations.

The Prime Minister said mutual understanding is the pathway to prosperity for the people of the hemisphere and added that peace is an imperative for shared prosperity.

The Seventh Summit of the Americas marked the first time all 35 members of the Organization of American States were represented at the meeting.

Cuba had never attended the summit. On that note, Prime Minister Harris said he was happy at Cuba’s inclusion and remarked that it indicates a recalibration of the relationship at the hemispheric level.

He said the exchange between Obama and Castro formally expressed the thawing of the unfriendly relations which had existed between both countries for more than half a century.

Regarding the future of Cuba-US relations, Dr. Harris said CARICOM leaders have long advocated the restoration of normalcy in the relationship between both countries.

He noted that Cuba and the United States of America are both allies of St. Kitts and Nevis; a position which has now been vindicated. Dr. Harris said while the new relations between Cuba and the US signal a fresh start, there is still significant work to be done on the part of both governments before complete normalcy is achieved.