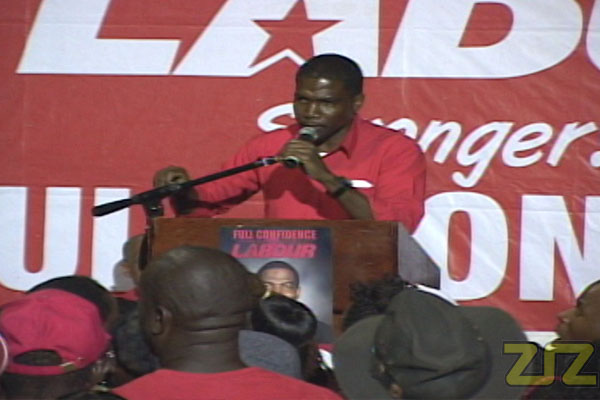 ZIZ News — St. Kitts/Nevis Labour Party caretaker candidate for Constituency #8, Dr. Terrance Drew, has lashed out against his political opponent, the Hon. Eugene Hamilton, for his failure to address crime in the constituency, and specifically, the Cayon community.

Speaking on Sunday, Dr. Drew said crime is an issue to be taken seriously as it adversely affects communities on several levels.

“The reason why I say the issue of crime is a very serious issue is that no community can be successful if crime is a problem.  Nobody can be comfortable in a community where security is not serious,” he said.

“Nobody can be comfortable in a community where they don’t know what would happen to their children.   Nobody can be comfortable in a community if they’re not sure if they’re gonna get home after they go out to work or their children go to school or they go to a community function.  And so I’ve been looking at the situation of crime.   And I ask myself the question ‘Why it is the representative is not taking the lead in dealing with the issue of crime?’  ‘Why is it the representative is saying that his hands are tied when it comes to the issue of crime?’ But I think that if an issue of crime is to be solved those who are elected leaders and leaders of other organizations must come together to formulate a plan to solve the issue of crime,” he added.

He continued that Hamilton’s excuse that his hands are tied in taking action to address crime within the constituency is unacceptable. Drew said that in addition to the work of the police, there needs to be a multi-faceted and creative approach to dealing with crime which includes strong community involvement.

“The reason why I don’t accept that his hands are tied is that in St. Peter’s about 5 years ago, or maybe a bit more, we had an issue with crime.  And the people in the community got together and decided that they would get rid of the issue of crime,” he said.

The labour party candidate further said that Eugene Hamilton’s constant excuses are a clear indication that he is not willing to put in the necessary work to effect the changes rightfully demanded by constituents.

“When a politician comes to you, who you have elected, and he tells you his hands are tied that politician is lying to you.  He’s not being genuine.  If I remember, in St.Peter’s when we had issues there it was people who solved issues, who were not elected to any political office. But he’s elected to a political office and he has the platform of the parliament from which he can speak.  And that is why it hurts so much when I see the issues affecting Cayon and the representative is telling the people that his hands are tied,” he added.