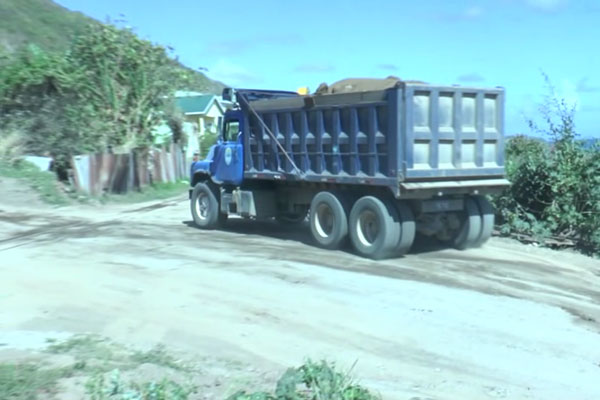 (ZIZ News) — Residents of Keys Village are concerned over health problems that seem to be linked to heavy vehicles that pass through their village.

Every day large vehicles travel to and from Keys Ghaut for sand mining.

It’s a practice that’s been going on for decades but over the past few years the dust that’s left in their wake has become a serious problem.

Siefroy Phillip has been living in Keys all his life and he said that the dust problem is unbearable.

“It’s terrible,” Phillip said. “These trucks, practically all day, would be entering and exiting along a dirt track and the dust that is created creates a lot of havoc and ailments for people, apart from the inconvenience in houses and stuff like that.”

Earlier in the week, Keys residents raised the issue with their Parliamentary Representative, the Hon. Eugene Hamilton. Phillip said they listed several solutions but paving the road is most critical.

He said, “Each one of them has some challenges but I think something needs to be done but I believe at some point in time the road has to be paved if this is going to continue.”

The Hon. Eugene Hamilton suggested diverting the trucks to another road to minimize the effect on the village.

“I actually started discussing with a few people the prospects of getting the road to going straight across and coming up by TDC and avoid coming through the village like that. That discussion has started. It has not reached far enough yet but I started that discussion because I was thinking we have to turn those trucks from coming through the village like that,” the minister outlined.

For now, residents try to keep the dust to a minimum by wetting down the road closest to their homes.