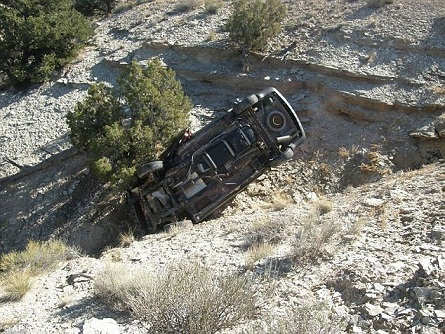 (UTAH) — A man wrote goodbye letters to his family as he lay dying in the wreckage of his van after crashing into a remote ravine in Utah.

His body was discovered on October 18 by a hitchhiker who spotted the crash site on a desolate stretch of Interstate 70 — more than 50 miles from any town and nearly 900 miles from his home.

Welch was injured in the crash and was unable to get out of his vehicle.

According to reports the salesman could have survived for more than a week and during this time he kept a diary and wrote notes to his wife Kelly and four sons.

But when asked what the letters contained he told the paper it was “a pretty private matter”.

The Tribune quoted Welsh’s wife Kelly as saying on Twitter: “Dave was entrapped in the vehicle down the 80ft ravine, he wrote each of us a love note.

“He knew he was dying and there was no way out.”

Police have said they do not know why Welch left his home without telling his family where he was going and there are no clues suggesting why he was driving through Utah.