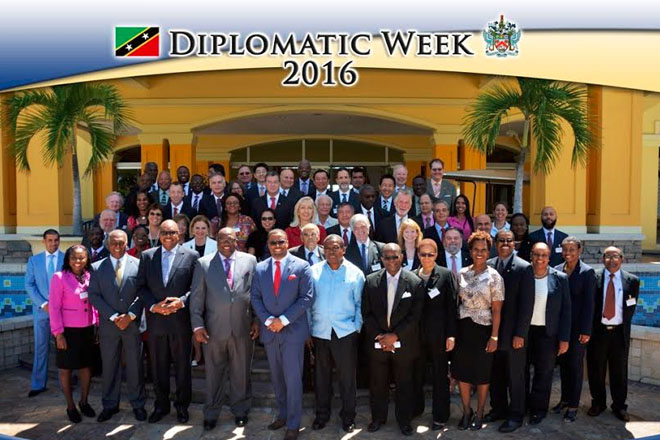 (SKNIS): An E-diplomacy workshop conducted on Friday, April 08, at the Ocean Terrace Inn (OTI), was an important feature of the recently concluded Ministry of Foreign Affairs (MOFA) Diplomatic Week 2016, which saw some 30 officials from the St. Kitts and Nevis Diplomatic and Consular Corps and staff of MOFA involved.

The training workshop was delivered by Dr. Jovan Kurbalija, Director of DiploFoundation and Head of Geneva Internet Platform.

The workshop provided participants with valuable information about e-tools that can help St. Kitts and Nevis as a Small Island Developing State (SIDS) to expand its participation in international meetings without physical presence and how officials can be more efficient at data for the practice of diplomacy.

A great emphasis was placed on the use of social media for curating information, as well as how social media can be better utilized for public diplomacy and promotion. The afternoon session provided all members of the St. Kitts and Nevis Diplomatic and Consular Corps the opportunity to make a presentation whereby they gave information as to what their missions have been doing in recent times.

They also relayed the challenges faced, as well as their goals in terms of the mission and what they would like to see happening in the diaspora.

Verna Morris, Chargé d’affaires at the Embassy of St. Kitts and Nevis in Havana, Cuba, shared her views about the training.

“It was very interesting,” said Ms. Morris. “It was indeed good to see that the Government under the Ministry of Foreign Affairs attracted several diplomats who participated in the e-diplomacy course. The Government saved a lot of money thanks to the High Commission in London that was able to get CS Global to put on the course via teleconference from Geneva.”

She further added that the course was greatly appreciated by many and noted that it was imperative to learn about her colleagues plans to promote international linkages.

“It was important to have the diplomats sharing on what they were doing to advance the foreign policy agenda of St. Kitts and Nevis in the respective countries where they are posted, especially since the last diplomatic week was held in 2008,” said the Chargé d’affaires. “The staff of the Ministry of Foreign Affairs benefited from this course which has deepened their understanding of how diplomacy works.”

The Honourable Mark Brantley, Minister of Foreign Affairs and Aviation, thanked the members of the St. Kitts and Nevis Diplomatic and Consular Corps and members at the capital, Basseterre, for the work that they have been doing and encouraged them to continue keeping the lines of communication open. They were also encouraged to continue working together and to build and forge partnerships and strengthen the foreign policy agenda of St. Kitts and Nevis.