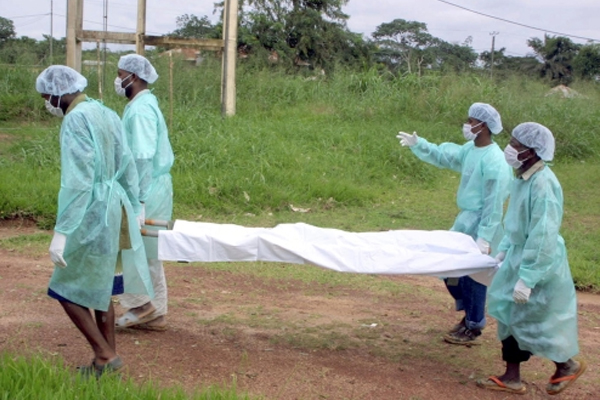 Freetown, Sierra Leone (AP) — One of Sierra Leone’s most senior physicians died Thursday from Ebola, the 11th doctor in the country to succumb to the disease, a health official said.

In neighbouring Guinea, a fire destroyed medicine crucial to fighting Ebola. The fire engulfed a warehouse at the Conakry airport and burned everything inside, said Dr Moussa Konate, head of logistics for Guinea’s Ebola response. He could not immediately say how much had been lost.

The world’s largest Ebola outbreak has drawn a massive international response, and supplies, including everything from rubber gloves to ambulances, have poured into West Africa. The disease has sickened more than 18,600 people and more than 6,900 of them have died, the vast majority in Sierra Leone, Guinea and Liberia.

Ebola has taken a particular toll on health workers, killing more than 350, depleting the ranks of doctors and nurses in countries that already had too few to begin with. Because Ebola is spread by bodily fluids, it is only transmitted through close contact. It is often called the “caregivers’ disease” because those infected are typically family members caring for the sick or health workers treating them.

The death of Dr Victor Willoughby, who tested positive for Ebola on Saturday, was a major loss for Sierra Leone, said Dr Brima Kargbo, the country’s chief medical officer.

“Dr Victor Willoughby was a mentor to us physicians and a big loss to the medical profession,” said Kargbo. “He has always been available to help junior colleagues.”

The 67-year-old died Thursday morning, just hours after an experimental drug arrived in the country for him. The arrival of ZMAb, developed in Canada, had raised hopes for Willoughby’s survival. But he died before a dose could be administered, said Kargbo. ZMAb is related to ZMapp, another experimental drug that has been used to treat some Ebola patients. The drugs’ efficacy in treating Ebola has not yet been proven.