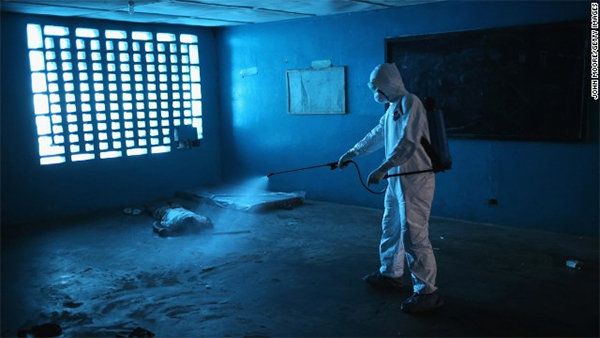 All patients who ran away had Ebola, and some chose to stay at the facility, Collins said.

The assailants stole mattresses and equipment, he said, adding that no one was injured in the incident and the attackers were not trying to free the patients; rather, they did not want the quarantine there. The assailants were using weapons but not wielding guns, according to Collins.

“It was an attack from people afraid of Ebola,” Collins told CNN. “Everybody is afraid.”

Since an Ebola epidemic was declared in Guinea in March, the disease has spread to Sierra Leone, Liberia and Nigeria. Ebola can be contracted by coming into contact with infected organs and body fluids such as blood, saliva, urine and other secretions.

In the deadly disease’s current outbreak in those countries, 712 people have died from Ebola and 1,310 people are Liberia confirmed to be infected with the virus, the World Health Organization reports.

Tolbert Nyenswah, Liberia’s assistant minister of health, told CNN that as of Friday, 154 people in the nation have died from Ebola. There are more cases in which patients are suspected to have the disease, but that information has not been confirmed, he said.

Last week, Liberia’s government said that sample doses of ZMapp, an experimental drug used to treat two American health care workers in Atlanta, Georgia, would be sent to Liberia to treat doctors who have contracted the virus.

The drug arrived and was given to three doctors, Nyenswah told CNN. He said the Liberian government is in talks to try to get more.

The country had requested the drug, and the White House and U.S. Food and Drug Administration approved it.

ZMapp has not been tested for public use. Earlier, the company that makes ZMapp said its supply was exhausted after fulfilling a request of a West African country which it did not, at the time, name.

Liberia has taken other measures to try to contain the virus.

In late July, it closed most of its borders and national campaigns have been launched to educate the public about how Ebola is spread and what to do if someone comes into contact with an infected person.

On Sunday, Cameroon’s information minister told CNN that the country was closing its border with Nigeria over Ebola concerns.

Issa Tchiroma Bakari said that all flights to and from Nigeria into and out of Cameroon are suspended.

People in Cameroon and Nigeria cross borders daily for commercial and personal reasons.