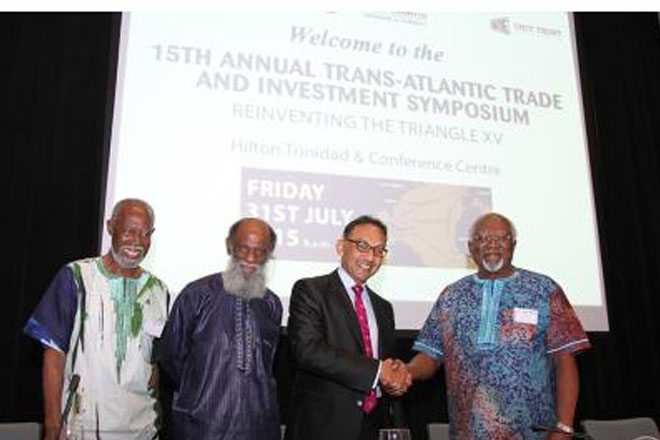 Port of Spain, Trinidad — Senator Vasant Bharath, minister of trade, industry, investment and communications and minister in the ministry of finance and the economy in Trinidad and Tobago has called for greater economic empowerment to increase trade relations with African countries.

Bharath made this appeal during the launch of the fifteenth annual Trans-Atlantic Trade and Investment Symposium hosted by the Emancipation Support Committee of Trinidad and Tobago (ESCTT) on Friday in Port of Spain.

In his address, Bharath stated that “the theme of the symposium ‘Reinventing the Triangle’ calls to mind the need for us to shift the archetype from one which was driven by colonialism and exploitation, to a reality focused on mutually beneficial trade between our regions, which has the ability to harness positive economic circumstances for all. It is essentially a call for intensified trade and economic cooperation between the Caribbean and Africa’.

“There is tremendous value in further improving economic collaborations between the private and public sectors as well as the Caribbean and African region. With the international community expected to inject 73.5 billion US dollars in foreign direct investment in 2015 as reported by the African Development Bank, it is evident that there is strong business confidence in the region and our discussions should also look at ways and means in which Africa and the Diaspora can leverage its combined strength, expertise, experiences and resources to drive further growth in their respective and collective economies,” he added.

The trade minister noted that the African economic reality has progressively changed over the years and that Trinidad and Tobago can gain valuable knowledge from exploring the Nigerian experience. He cited the improved economic performance of Nigeria, sub-Saharan Africa’s largest oil exporter, which amidst uncertain economic times in 2014 achieved an impressive growth of 6.3% as stated by the International Monetary Fund. This he believed was achieved through “sound macroeconomic policies, collective determination and resilience”.

In delivering remarks at the launch, Khafra Kambon, chairman of the Emancipation Support Committee said that “the African continent now has five of the fastest growing economies, which signals Africa as a place for investment”. He encouraged the participants to “use the symposium to form partnerships and to foster mutually beneficial relationships”.

Keynote speaker Dr Julius Garvey focused on the need to support the local agriculture sector and made an appeal to participants to “practice freedom through self-reliance and self-determination and utilize the available resources, labour, capital and commitment to communicate and develop meaningful trade relationships with our brothers and sisters in Africa”.

The one-day symposium addressed areas such as business with Africa – opportunities and experiences; tools for would-be investors – research, statistics, finance and expanding the framework for co-operation.