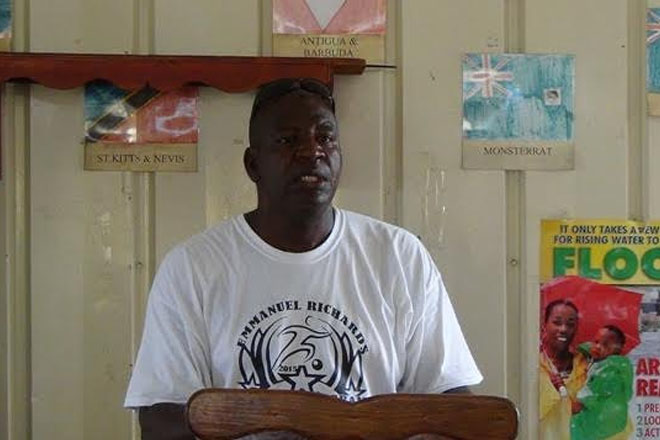 Sports Page — An impressive closing ceremony on Friday 24th July signaled the close of another successful Eddy Richards Football camp. The closing ceremony was chaired by Richards himself who indicated that it was a pleasure for him to host the camp every year, which by the way, is in its eleventh year.

He noted that some of the previous participants have made it to the Nevis under 12 and under 15 national teams and stated that it was obvious that the coaches were doing an excellent job.

He pointed out that some of the skills learnt during the camp, were passing, controlling and dribbling.

He also took time out to thank the many sponsors; the kitchen staff and the guest speakers who lectured during the camp.

The featured speaker was Mr. Carl Williams, Permanent Secretary in the Ministry of Tourism, who spoke on behalf of Minister of Sports, Hon. Mark Brantley, who has been a major sponsor of the camp through the years.

He encouraged the children to focus on discipline; team work; honesty; perseverance and the spirit of camaraderie.

‘Some of you may go on to be professional footballers but those of you who don’t; I admonish you to become better persons for the country.’

He also congratulated Richards and the other sponsors.

Representative for the Development Bank, Miss Avelyn Browne congratulated Mr. Richards on the hosting of another successful camp and assured those present that her institution would be happy to continue supporting such a program. She also used the opportunity to advertise some of the special programs being offered by the bank for children.

A representative for the CIBC Bank also spoke briefly and admonished the participants not to think of the program as only something to do because school is out. She also pledged her bank’s continued support of the program and informed the children of a special package deal being offered by her institution.

Coach Jazza, out of St.Kitts who had assisted for three days of the camp, noted that the participants were enthusiastic and eager to learn.

He urged them to continue to keep fit and to practise and to stay focused.

After the vote of thanks by Mr. Richards, certain items of equipment which had been donated to the camp were distributed to the participants.