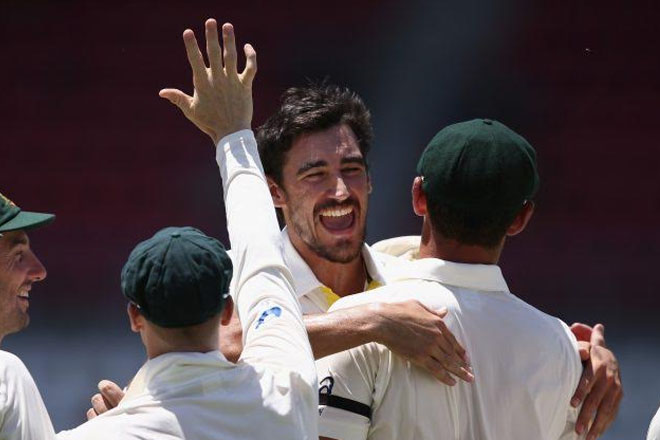 Edge with Australia after 13-wicket day

Sports Page — Thirteen wickets made for an eventful opening day of the series in Dominica, and it was Australia who went to stumps in the slightly stronger position. Denesh Ramdin gave his men the chance to bat first but they survived only two sessions for their 148 before Australia played out the final session of the day and went to stumps on 85 for 3, trailing by 63 on a surface that had proven surprisingly challenging.

Steven Smith was Australia’s rock during the home summer against India and again he appeared immovable, although he also found scoring difficult with variable bounce and a slow outfield. He ended the day on 17 from 67 deliveries and had not scored a boundary; debutant Adam Voges had struck four fours in his 20 from 27 balls, perhaps the positive result of nervous energy.

David Warner had fallen early for 8 when he was surprised by extra bounce from a Jerome Taylor delivery and a leading edge was taken at point. Shaun Marsh, promoted to open in the absence of Chris Rogers, edged to slip off Jason Holder for 19, and Michael Clarke edged Devendra Bishoo behind after scoring a bright 18 off 28 balls, including one six over midwicket.

Voges was gifted a low full toss second ball to get off the mark with a boundary in Test cricket and by the time stumps arrived he had made a solid start. The Australians were generally careful in their 30 overs at the crease after the West Indies batsmen struggled to come to grips with the conditions and were skittled inside 54 overs.

Josh Hazlewood and Mitchell Johnson collected three wickets each and it did not take long for the Australians to get back into five-day mode, having not played a Test since early January. The catching especially was outstanding, with Clarke, Voges and Marsh all making sharp takes of varying degrees of difficulty that ensured their bowlers were backed up.