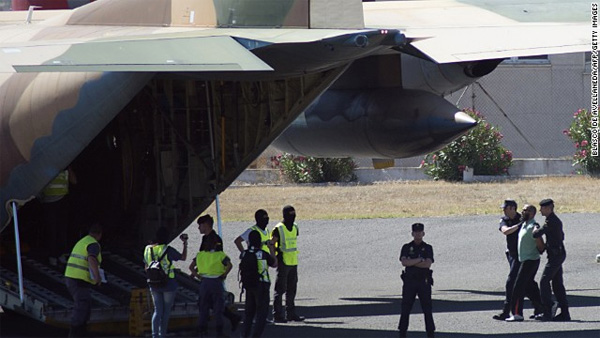 The arrests come just ahead of the proclamation of Spain’s new King Felipe VI on Thursday in parliament, and the ministry last week raised the terror alert level from 2 to 3, to tighten security in the capital during the festivities.

The suspected leader of the cell broken up Monday had been detained in Afghanistan in 2001 and later was a prisoner at the U.S. base at Guantanamo Bay, Cuba, the ministry said.

Also in Melilla, last March, a Spaniard and two Frenchmen were arrested on similar charges.

The movement of Islamic militants from Europe and North Africa to conflict zones such as Syria, Mali and Libya — and their eventual return to Spain to potentially carry out terrorist attacks — has been a prime concern for authorities battling terrorism.

This week, thousands of police and security forces will be on alert throughout Madrid; King Juan Carlos, 76, Spain’s head of state and commander in chief, formalizes his abdication Wednesday, leading to the proclamation of his son, Crown Prince Felipe, 46, as the new King, in a nation where the elected government runs the country.

The new King and his wife, Princess Letizia, who will become queen of Spain, are due to ride through the streets, from Parliament to the royal palace, and city officials have urged Spaniards to turn out for the parade and to hang Spanish flags from their homes.