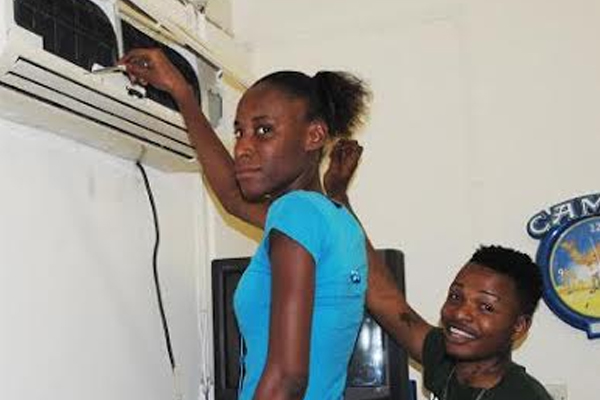 Basseterre, St. Kitts — After studying electricity at the Clarence Fitzroy Bryant College (CFBC), the People Employment Programme (PEP) is helping a young man from Buckley’s Site in Basseterre put pieces in the puzzle.

“I was studying certain things in college, CFBC, where I did electricity,” said Mr Leslie Williams. “Since I joined PEP I have learnt a lot of things, and gained experience. Here it is a different ball game because we are actually doing the practical work rather than just doing the class theory. I am putting pieces to the puzzle, because I had school work now I am learning the practical work.”

Mr Williams is one of the fourteen members of a PEP-sponsored Electrical Class at Project Strong, which is being facilitated by veteran electrician, Mr Owen Ward. Their facilitator, other than theory, has been giving them hands-on assignments that have broadened the outlook of the trainees.

“If I am set on my own, I could do certain things,” said Mr Williams. “I can’t do everything alone. I am still under instruction from Mr Ward. PEP is helping the youngsters out there and people them who want to really work and so on. I am one of them and I am grateful for that.”

Another trainee in the electrical class, Ms Phealecia Patrick 23, of Camps Bay View, and who is also a musician with the Defence Force Band, is learning more than she bargained for after she failed to join the class she had wanted to join with the People Employment Programme.

“I wanted to do hospitality but they told me it was full up, so I chose electricity,” explained Ms Patrick. “It is a good alternative and I am happy doing it. After this course I am looking at getting employed as an electrician but still playing music.”

According to the facilitator, Mr Owen Ward, when the class started last year at the Newtown Community Centre, there were twenty students, but some have left and gone to various work places and the class is now down to fourteen.

“There are seven males and seven females,” said Mr Ward. “Over the ten months we did some electrical work, house wiring, laying down pipes, bending pipes, pulling through electrical wires, and fitting up fixtures. We also did some repairs of washing machines, refrigerators, so the students have a good background about how to do a lot of repairs.”

He however realised that they are more into the hands-on than the theoretical session, and to balance the studies, Mr Ward has been mixing theory work in the class at Project Strong, and hands-on assignments where he says that the result of their work amazes him.

“From there we could not hold any classes so we were searching for space and then we indicated that Project Strong could offer us a home as there was a classroom that were not in use and so when we came here we had some tidying to do,” noted Mr Ward. “The AC was not working and we had to fix it, and so they allowed us to us this classroom.”

They have done work at the Cardin Home where they helped fix an air conditioning unit, install a new electric stove and a heavy duty washing machine and dryer. A lady from Ottley’s Village donated some fifteen heaters (iron boxes) which they repaired and to their surprise the lady gave them the repaired items.

However a major test was when a businessman from Gillard’s Meadows allowed them to do the electrical work in a new house that he was putting up at Shadwell.

“We started a house at Shadwell from scratch right on, to put the fittings and we want to say thanks to the owner, Mr Bruce Archer for allowing us to do the practical there by laying down the pipes and then pulling through the wires and they had a nice experience there,” explained Mr Ward.

Mr Ward is sending out an appeal to government offices that have electrical problems to give his class a chance to do the repairs so that they can fortify their theory work with practical work. He observed that the result will be more than satisfying as the young electricians are now properly equipped.