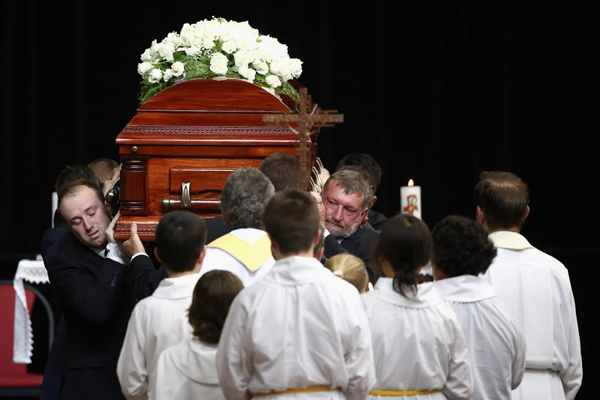 Sports Page — Australia’s captain Michael Clarke led the tributes at Phillip Hughes’ funeral in Macksville, where family, friends, team-mates, past cricketers, dignitaries and the public gathered to mourn for the batsman, who died last Thursday.

The funeral service was broadcast live on Australian television and radio, and was also shown at the SCG, Adelaide Oval, WACA and Bellerive Oval, where mourners were invited to gather for a public viewing of the Macksville service. Hughes died aged 25 after being struck by a bouncer last Tuesday during the Sheffield Shield match between New South Wales and South Australia at the SCG.

Eulogies were delivered by Hughes’ brother Jason and sister Megan, and his cousin Nino Ramunno, and tributes also came from family friend and fellow Angus breeder Corey Ireland, Cricket Australia chief executive James Sutherland, and Clarke. As Clarke struggled to hold back the tears before beginning his tribute, he joked that Hughes would “definitely be calling me a sook right now, that’s for sure”.

Clarke spoke of the remarkable outpouring of grief that has come from around the world in the wake of Hughes’ death, and openly wondered if it was a tangible example of the much-mentioned “spirit of cricket”. He said Hughes’ spirit was now “part of our game forever” and “will act as a custodian of the sport we all love”, and urged cricketers to “play on”.