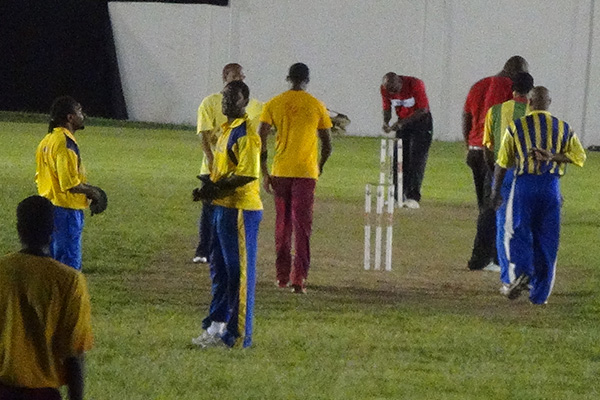 A powerful shower of rain, a damp pitch and a slippery outfield was not enough to prevent the SDA Jets from crashing to defeat versus the Empire team on Monday 9th December.

This as the action continued in the Nevis Sports Department/Development Bank tape ball league at the ET Willet Park.

It was the first game of the evening and the SDA Jets batted first and lost both openers early but Elroy JIMBO David and Captain Curtis Morton Jr, teamed up in an impressive partnership that formed the bulk of the team’s scoring.  They eventually got to 64 at the end of their allotted 10 overs.

When the Empire team batted, they also lost two early wickets but an aggressive partnership between Wasim Mintos and Captain Adelvin Phillip sealed the deal for the Gingerland team.

In the second game of the evening, Highlights Int was clinical in their disposing of the Church Ground team.  Church Ground batted first and managed 56 for 8 from their 10 overs

Highlights when they batted were off to a positive start, led by the inform Wendell MICEY Wallace.

They cleared the target in just 7.1 overs in dismissive fashion.