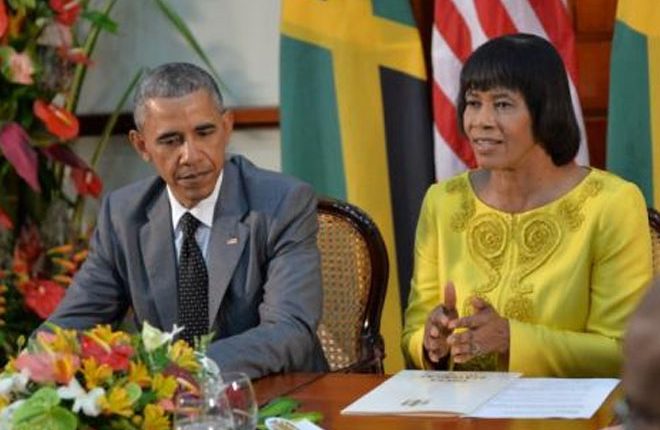 Kingston, Jamaica (JIS) — Matters pertaining to energy and Jamaica’s economic reform programme (ERP) were among the highlights of bilateral talks between Prime Minister Portia Simpson Miller, and US President Barack Obama at Jamaica House on Thursday.

To this end, Simpson Miller renewed her administration’s commitment to continue the ERP’s implementation and to build on the gains made so far.

She said note was also taken of the signing of a statement of intent by both countries on Thursday morning, “to pursue the development and deployment of energy-related technologies.”

“Through this statement of intent, we aim to increase bilateral trade, boost the development of emerging technologies and industries, and pave the way for future innovation in energy-related fields,” she said.

Simpson Miller pointed out that Obama’s visit is indicative of the “strong bilateral relationship that exists between Jamaica and the United States of America.”

“These relations are anchored in our strong democratic traditions and the historical and cultural bonds that unite our peoples,” she noted.

Simpson Miller said the importance of relations between both nations “must be clearly understood”, pointing out that the USA is Jamaica’s leading trading partner, main tourism market, chief source of foreign direct investment (FDI), and “home to the largest Jamaican Diaspora.”

“The main aim of our dialogue, therefore, was to further strengthen a partnership that existed long before the formal establishment of diplomatic relations in 1962… (and)… to express… our gratitude for the high levels of support provided by the United States to Jamaica over the years,” she added.

In his statement, Obama, who indicated that his visit was an “extraordinary pleasure”, also underscored the long history between the countries.

“It is not just a deep friendship between states, but it is also a family bond, as represented by the many Americans, who come here to visit… and the extraordinary Jamaican-American community that has done so much to contribute to the growth and development of our country,” he said.

In relation to energy, Obama pointed to a “whole host of areas” where the United States can provide assistance, both to Jamaica and the wider Caribbean.

In noting that Caribbean states “are paying significantly higher prices for energy”, despite having “less resources”, the president contended that “if we can lower those costs through the development of clean energy and increased energy efficiency, we could unleash, I think, a whole host of additional investments and growth.”

Regarding Jamaica’s ERP, Obama indicated his country’s support for this engagement to, among other things, reduce public debt, “which, ultimately, will determine long-term growth, to strengthen good governance and rule of law.”

“We (also) spent a lot of time talking about young people because one of the best ways to ensure growth and prosperity is by empowering more of our citizens,” he added.

While commending Jamaica’s “very capable security efforts”, Obama pointed to what he described as “strains” being placed on the region, given illicit activities such as the transnational drug trade, which he said “continues to make moves to try to expand its reach.”

“So, we are strengthening our cooperation, (and) making sure that (as it regards) training, equipment, coordination, and intelligence, that we are in sync. It’s going to be very important, and I look forward to our efforts there, as well,” Obama said.