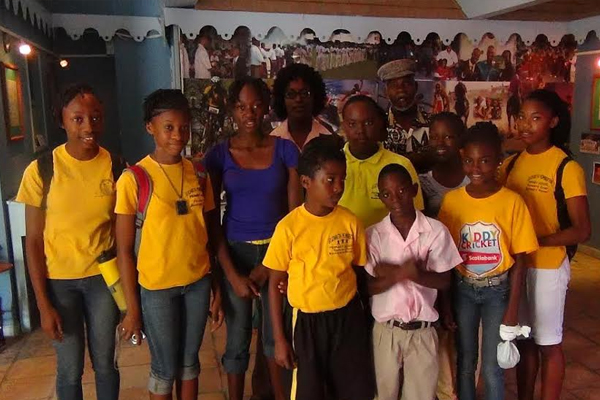 Sports Page– As the Sports Museum week 2014 edition continued, the students from the Elizabeth Pemberton Primary School were the privileged ones to meet with some of this year’s honourees.

The two outstanding sporting figures present at the Museum on Thursday 10th July, were Denzil Parris and Shakira WANDA Parry.

He has umpired up to the regional level in Cricket. He has been a long serving Football referee and in more recent times, he has been an Athletic coach and would take particular pride in his work with outstanding Javelin thrower in the Federation of St. Kitts and Nevis, Adrian Williams.

Wanda Parry on the other hand, has played a lead role within the last ten years in keeping the Sport of Basketball alive on the island of Nevis.

She has also worked overtime in securing sponsorship for the tournaments under her supervision.

She has in more recent times, established a good rapport with the St. Kitts-Nevis Basketball Association based in St. Kitts and has been rewarded with the following:

Both individuals spoke to the children and generally encouraged them to put out their best efforts in the sport/s of their choice and to seize all of the possible opportunities including scholarships.

They also encouraged them to stay positive and to stay away from negative vices.

The Sports Museum week climaxes today with the focus on the honouring of the late Thynel Martin, posthumously. There is also expected to be a presentation to the Museum by top triathletes, Reggie Douglas and James Weekes.