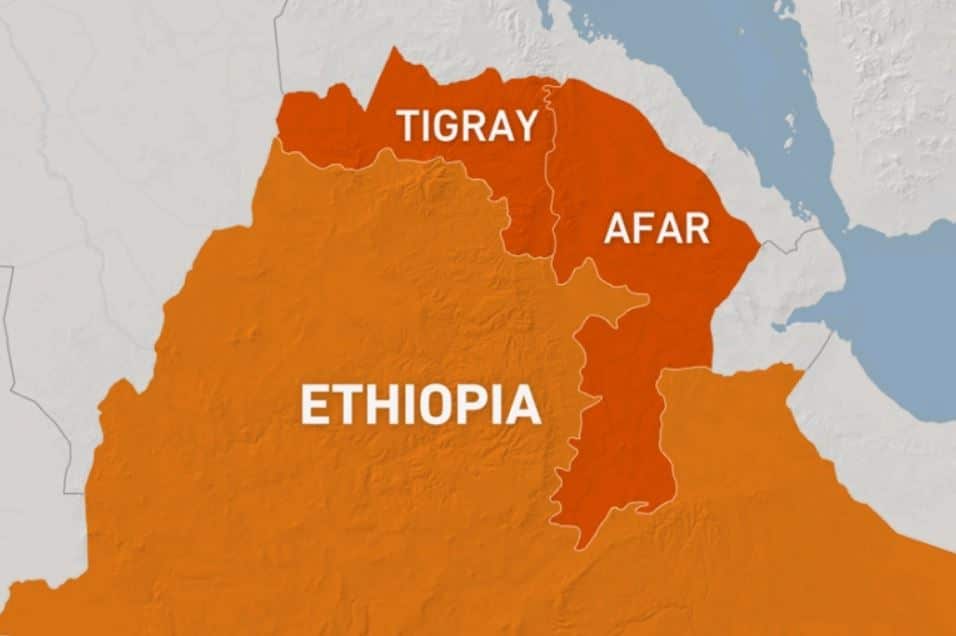 Forces from Ethiopia’s northern Tigray region have mounted attacks in neighbouring Afar region, marking an expansion of an eight-month-old conflict into a previously untouched area.

“Now [Ethiopian military forces] are on their way and we will work with them to eliminate [the Tigrayan forces],” he said.

Getachew Reda, a spokesman for the Tigrayan forces, confirmed they had been fighting over the weekend in Afar.

“We are not interested in any territorial gains in Afar, we are more interested in degrading enemy fighting capabilities,” he said via satellite phone.

He said Tigrayan forces repelled militias from Ethiopia’s Oromia region that had been sent to fight alongside the Afar regional forces.

Thousands of people have died in the Tigray conflict so far. About two million people have been forced to flee their homes and more than five million are relying on emergency food aid.

Ethiopia has a federal system with 10 regions and in the past week, the conflict in Tigray has drawn in regional forces around the country as they deploy to support the federal military.

Fighting erupted in November between the region’s ruling Tigray People’s Liberation Front (TPLF) and the military.

Three weeks later, the government declared victory when it seized the regional capital, Mekelle, but the TPLF kept fighting.

At the end of June, the TPLF retook Mekelle and most of Tigray after the government withdrew soldiers and declared a unilateral ceasefire.

The spillover of the war into another part of Africa’s second most populous nation may pile more pressure on Prime Minister Abiy Ahmed.

He won the 2019 Nobel Peace Prize but is facing international criticism over the conflict amid reports of atrocities committed by federal forces and troops from neighbouring Eritrea who have fought alongside them. His government says it is investigating such reports.

The TPLF dominated Ethiopia for decades as the strongest force in a multi-ethnic coalition, until Abiy took power two years ago.

They say they were forced into conflict after attempts to mediate with Abiy and ensure their region’s autonomy in line with the constitution broke down.

The government designated the TPLF “a terrorist organisation” in May.

TPLF leaders have said they will keep fighting until they regain control of disputed territory in the south and west of Tigray, which was seized during the fighting by the government’s allies from Amhara region.

On Sunday, Abiy said the Ethiopian military was prepared to defeat Tigrayan forces.

Forces from Amhara region, which has a border dispute with Tigray, have been supporting the military since the beginning of the conflict.

On Friday, three other regions said they were sending forces to support the army.

On Sunday, the Somali region said it was also sending troops, as did Benishangul-Gumuz region on Monday.

Afar is strategically important because the road and railway linking the capital, Addis Ababa, to the seaport of Djibouti run through it.

Djibouti is landlocked Ethiopia’s main access to the sea.

Over the weekend, the head of the TPLF said that Tigrayan forces had released about 1,000 government soldiers captured during recent fighting.

The International Committee of the Red Cross said on Sunday it had begun visiting soldiers being detained in Tigray.

The United Nations’ World Food Programme on Monday said its convoy of nine trucks was attacked on Sunday morning while moving aid into Tigray.

The convoy was attacked 115km (70 miles) from the town of Semera in Afar, the agency said.

WFP has suspended the movement of all convoys from Semera until security can be assured.