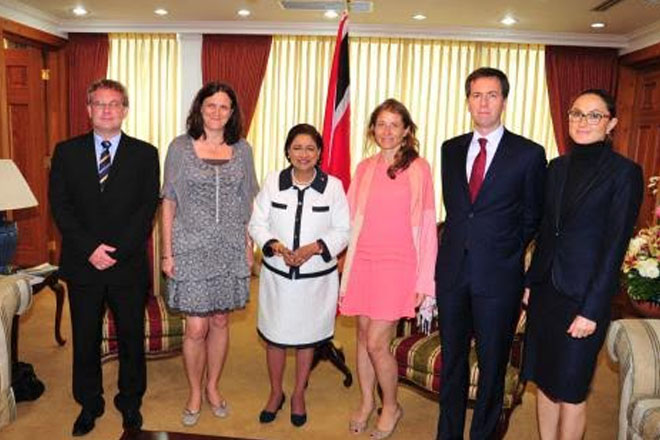 The prime minister shared some of her government’s diversification plans in particular the drive towards economic segmentation through the Green, Blue and Silver Economy, which targets the country’s physical environment and renewable energy resources, marine resources and our senior citizens respectively.

The prime minister also expressed her thanks to the commissioner for her efforts, on behalf of Trinidad and Tobago, in securing the Schengen Short Stay Visa Waiver Agreement, which this country now enjoys with the EU.

Malmström congratulated Trinidad and Tobago on its strong economic performance and future plans, while re-affirming the EU’s continued support for development projects in the country and the region.

The commissioner signalled her agreement with Trinidad and Tobago’s thrust to court deeper investment and trade linkages with the EU and commended the country on its positioning as the “Gateway to the Americas”. She also expressed keen interest in this country’s proposal of a Caribbean Energy Fund to mitigate against rising energy costs for many of its Caribbean neighbours.

The prime minister and Malmström both recommitted to a strengthened partnership between Trinidad and Tobago and the EU, based on mutual interests and values, as well as ongoing dialogue on bilateral, regional and multilateral issues.

Joining the prime minister during the meeting were Dr Bhoendradatt Tewarie, acting minister of foreign affairs and minister of planning and sustainable development, and Vasant Bharath, minister of trade, industry, investment and communications.