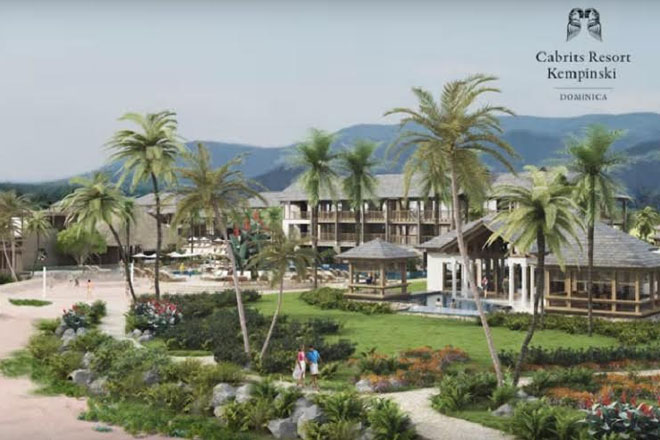 (Caribbean360) – ROSEAU, Dominica – Europe’s oldest luxury hotel group is developing the Caribbean’s first Kempinksi Resort in Dominica which is expected to open its doors in just under three years, bringing hundreds of jobs at every stage of the project.

Ground for the Cabrits Resort Kempinksi Dominica, being undertaken by Range Developments for the Kempinski hotel group, was broken recently at Douglas Bay, Portsmouth, less than two months after Tropical Storm Erika devastated the island.

“Today’s groundbreaking ceremony coming almost seven weeks after this country was struck by the most destructive storm in living memory sends a strong signal that we are rising again, and together we shall build a better Dominica which will make all of us proud,” Acting Prime Minister Rayburn Blackmore said.

Tourism Minister Senator Robert Tonge agreed that the development was “a symbol of hope for the creation of additional employment where one can provide for their families and a great opportunity for entrepreneurs to provide many services which the hotel will require”.

“To the entrepreneurs, remember opportunity favours the prepared so do your necessary research so you can capitalize on all the amazing opportunities which will be before you,” he advised.

Meantime, Minister for Trade and Employment Ian Douglas said he saw the project as a game changer.

“I know the economic impact of this hotel both during and after the construction phase: much-needed employment for many of our people; a major consumer of our crops, meats and fish and other services; stimulation of interest in pursuing careers in tourism and tourism management; improvement in the improvement of other ancillary services, very much like what Ross University has done on the other side of the town; increased sales and revenue to businessmen and merchants; and a general improvement in the sense of pride and well-being of our people, not only those who will work at this establishment but all of those who will be associated,” he said.

Managing Director of Dubai-based Range Developments Mohammed Asaria told the gathering that he believed the resort would be in one of the best locations anywhere in the region.

“I spent two days driving around the island trying to find perfection and as we went through site by site on the list, my colleagues who were accompanying me could see the disappointment on my face. All of a sudden the eureka moment happened and we stopped on the road and the lady accompanying me jumped out of the car in her high heels and ran down the trail [to Douglas Bay]. I followed her and as soon as we came to the end of the trail, I saw the view and there it was, the home of Kempinski Dominica. This site, without doubt, rivals any other hotel site in the Caribbean; natural beauty, calm waters,” he recalled.

“You have my pledge that we will respect the environmental integrity of this site as we are entrusted to do so. [We will] develop in harmony with land and sea to ensure sustainability.”

Range Developments is expecting to open Cabrits Resort Kempinski Dominica in the second quarter of 2018.

The project will employ close to 500 at the peak of construction, the same number when it becomes operational, and double that indirectly.