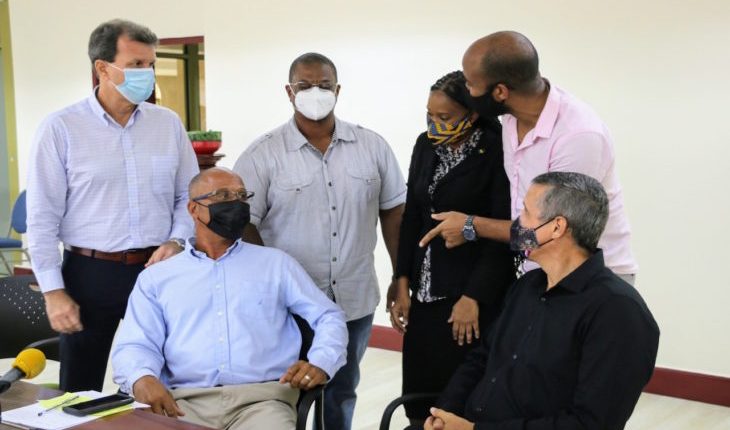 Ex-LIAT workers to get one-off $2,000 payment and additional help from Barbados Government

Bridgetown, Barbados, May 6, 2021 (Barbados Today): LIAT’s Barbadian ex-workers on Wednesday described a one-off $2,000 relief payment from the Mia Mottley Administration as a lifeline, some 400 days after being sent home by the Antigua-based carrier without a cent in severance.

Former pilot Neil Cave, who has been spearheading the group’s struggle for severance and other entitlements, said the assistance offered during a meeting Wednesday with Prime Minister Mottley would help avoid them “going further into the abyss”.

He told Barbados TODAY: “I just feel relieved because the suffering of the workers was really getting to a dangerous point, to the point of no return for some…and so it could not have come a day sooner; and I am just extremely grateful that the Government has decided to put the suffering to an end for now.

“It is not anything close to what is owed to us but it is at least a lifeline… an advance that would allow us a roof over our heads, put groceries on the table… that kind of thing for a period of a year to allow people to get back on their feet somewhat and stop going further into the abyss.”

The National Union of Public Workers, which represents the Barbadian pilots and attended the meeting, welcomed the assistance for the former employees.

“This is something that pleased both the pilots and the union because, as we indicated before, there were a number of challenges that the piloting staff were going through that needed to be urgently resolved. So we were happy to hear that there was some kind of relief being offered to the pilots,” NUPW President Akanni McDonald told Barbados TODAY.

“Ultimately, we would like to see the issue resolved, but we believe this is an important first step to offering immediate relief to those workers who have been going through some very difficult challenges since last year when they were laid off,” McDonald added with reference to outstanding severance pay.

With regards to any possible timeline to have the matter resolved, the union president suggested that the airline’s shareholder governments would have to speak with each other in relation to how this matter is ultimately settled.

McDonald said: “Remember, LIAT corporation is owned by four governments. So there needs to be a conversation between the Barbadian Government and the other shareholder governments that are involved. But as the old people say while the grass is growing the horse is starving. So while those discussions are going on, we still need to have some kind of relief being offered to the workers; and this meeting today, indicated that that would be given to those workers.”

He said everything would be done by the union to ensure that everything is done to bring as much relief to these workers as possible including the issue of a moratorium on loans with financial institutions.

The Barbados Workers Union which represents the other categories of LIAT staff here also attended the meeting but neither General Secretary Toni Moore nor her deputy Dwaine Paul could be reached for comment.

Prime Minister Mottley met with a large number of the ex-workers representing a cross-section of the airline’s staff and offered them financial assistance pending the conclusion of efforts to resolve the substantial issue of severance.

The just under 100 Barbadian employees, who were among other Caribbean colleagues placed on the breadline by the collapsed regional air carrier, are each expected to start receiving a one-off gift of $2,000 by next week.

A statement issued by the Prime Minister’s Press Secretary Roy Morris said the gift will give authorities time to put other measures in place that would offer further relief over a much longer period.

In addition to that, those workers who were paying into the Antigua and Barbuda Social Security Scheme and are entitled to severance under that country’s laws will also be given a loan by the Barbados Government that spreads out over a year.

“Arrangements are now being put in place to allow them to receive an advance of $2,000 per month from the Government of Barbados, to be paid back at a future date from any eventual severance settlement,” Morris disclosed.

He said the Prime Minister explained to the ex-workers that this would be provided for up to one year, to be terminated earlier if they are able to find alternative employment before the end of that year.

“Mottley stressed that she understood that $2,000 a month would not equate to their salaries or erase the debt and hardships they have accumulated since they stopped working, but she was trying to assist them while balancing it against all the other urgent needs of Barbadians,” Morris said in a statement.

The PM’s press secretary added: “Those terminated Barbadian LIAT staff who worked from Barbados and are entitled to severance from the National Insurance Scheme are to have their severance pay hearings fast-tracked.

“All former Barbadian LIAT employees who were based here paid contributions into the local National Insurance Scheme, and are therefore entitled to severance, will now benefit from expedited hearings by the NIS Tribunal.

“It is expected that these hearings will also begin as early as next week, with the hope that they will be wrapped up in time for payments to be made just after the end of the month.

“Prime Minister Mottley explained that it had become necessary for the cases of these workers to go before the Tribunal since the Judicial Administrator of LIAT in Antigua, Cleveland Seaforth, had so far failed to sign and deliver to Barbados the paperwork that would have automatically triggered severance payments.”

The Prime Minister also promised to intervene in the situation where workers’ loans and other financial obligations were outstanding due to their inability to pay as a result of dried up funds.

Said Morris: “In the face of a direct request from the employees who related their encounters with banks and other creditors, the Prime Minister promised to reach out to the sector on their behalf to solicit payment eases.

“The workers agreed to the immediate formation of a small working committee to liaise with Government to ensure all information necessary for the fulfilment of the promised assistance is available to the relevant agencies, and the former LIAT workers will meet again with the Prime Minister in 100 days.”

It was at an emotionally-charged news conference just under a week ago that a group of the Barbadian ex-LIAT employees spoke of going for more than a year without any payment, thus leading to at least one person attempting suicide and others struggling with depression, losing their homes and their ability to support themselves.

They said many have had to depend on the support of loved ones.

LIAT is currently under court-sanctioned administration as it seeks to avoid liquidation by undergoing restructuring.