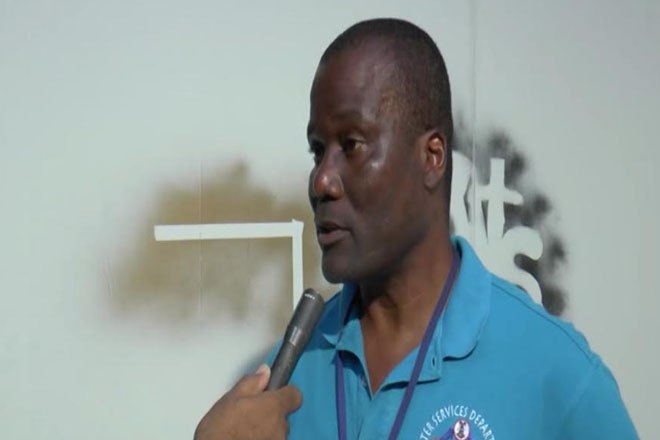 (ZIZ News) – The Water Services Department in St. Kitts has put a number of measures in place to deal with the extended dry spell which has led to a water rationing system for some communities.

On Monday, during a telephone interview, Paul listed some of the other measures that have been put in place.

“These are all measures to curb water consumption. We want to encourage people to report leaks at the Water Services Department. Our number is 465-8000 because what’s happening is that our main source or the source that supplies almost 90 percent of the water in Basseterre and its environs within the South East Peninsula and Bird Rock and Half Moon and Frigate Bay, we are now only extracting about 60 percent of the capacity,” he stated.

Paul also advised persons without cisterns at their homes to purchase large storage containers of 500 gallons or more.

Additionally, he asked that persons refrain from watering grass and washing their vehicles with a hose, adding that there will be strict monitoring of standpipes.

Paul said because of the extended dry spell, his department had only been able to extract about 60 percent of the capacity at the Basseterre Aquifer.

“We have continuously been pumping water out of that Aquifer but there has been no rainfall to replenish the Aquifer or to recharge it so the water levels in the Aquifer are dropping and if we continue pumping at the rate we are, we could eventually start pumping salt water and that would damage the Aquifer,” the water official revealed.

“The fact is, it took a while for our water levels to reach where they are now. It’s going to take a while and a lot of rainfall for the Aquifer to be replenished and so these measures are going to be in place for a while,” he continued.

In order to ensure that customers comply with the recommendations that have been put in place, Paul said fines can be charged and services disconnected in cases where persons violate the measures.

“Well, they’re on the books already. The law is backing us. If someone is wasting the water wantonly, we have the power to disconnect so we’re going to caution folks and if it persists, we have the authority within the law to disconnect,” he said.

The Acting Water Manager also told our reporter that his department has temporarily stopped selling water to cruise vessels.

The rationing allows for water services to be halted between 10:00pm and 5am.