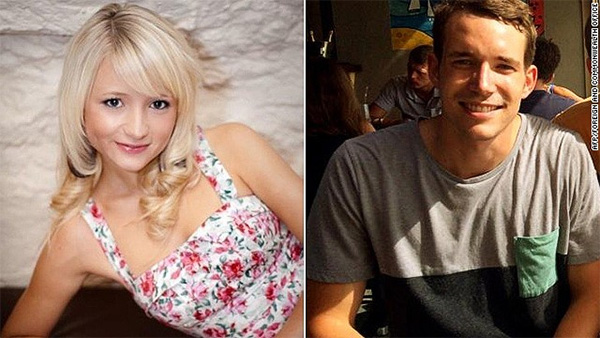 Bangkok, Thailand (CNN) — The families of two Britons battered to death on a popular Thai resort island have paid tribute to them, as police said they were looking for a British man in connection with their killings.

The bodies of the two tourists, identified as David Miller, 24, and Hannah Witheridge, 23, were found on a beach on the small southern island of Koh Tao on Monday.

In a statement issued by the British Embassy in Bangkok, Witheridge’s family said she was “a beautiful, intelligent, loving young woman who poured joy into the lives of all who knew her” and they were “utterly devastated and shocked by what has happened.”

Miller’s family said: “David was an artist by temperament, so talented. He had a creative eye that he carried with him through life and in his degree. He was hard-working, bright and conscientious, with everything to look forward to.”

Col. Prachum Ruangthong, the police chief of the local precinct, said on Wednesday one line of inquiry focused on a British friend of the male victim. He said that police had interviewed the man, who shared a room with the victim, but he had since left the island.

He added that he had asked the British Embassy for their help in locating the man.

However, Prachum told CNN that they were still pursuing other leads. He added that “from initial forensic examination, the victims were repeatedly hit.”

Police issued a grainy image from a CCTV camera outside the bar where the two tourists were last seen. They said they were interested in speaking with the person, who they said was an Asian man.

The deaths are being investigated as murders and police said they had ruled out robbery as a motive for attack.

The victims were discovered partially undressed with severe injuries to their heads, and a hoe with blood on it was found near the bodies, police said.

The two Britons were last seen hanging out with friends at a bar in the early hours of Monday before leaving together, said Maj. Gen. Kiatthipong Khaosumarng, the provincial police chief.

The deaths have shaken residents on the idyllic island, which takes up only 21 square kilometers (8 square miles) amid bright blue waters in the Gulf of Thailand. Authorities said it was the first homicide case on Koh Tao in at least eight years.

The island is popular among tourists for its diving locations, white sand beaches and vibrant nightlife.

Police said that interviews with friends of the victims indicated that the two Britons may have only recently met while on the nearby larger island of Koh Phangan before traveling to Koh Tao for a party excursion.

The British Consul arrived in Koh Tao on Tuesday, the British Embassy in Bangkok said.

“The Embassy is urgently seeking information from the local authorities and Consular staff stand ready to provide assistance to friends and family at this tragic time,” it said in a statement, declining to give any further details on the case.