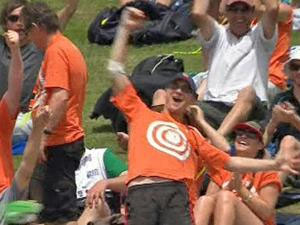 Hamilton, New Zealand – A fan in Hamilton has pocketed $100,000 from a day out at the cricket after grabbing a one-handed catch in the crowd.

Michael Morton claimed the catch from Kieran Powell’s bat in the sixth over of the final one-dayer between New Zealand and the West Indies, instantly earning a bumper pay day.

A promotion by Tui saw fans around the country flock to the cricket this summer wearing orange t-shirts, with the promise of $100,000 for any to take a one-handed grab

Mr. Morton, who was at the game with his father, was still coming to terms with his good fortune when he spoke to the Herald.

“It’s a bit unbelievable, man. A bit weird to honest,” he said.

“I was stoked that I caught the catch. It would have been a very long afternoon if I dropped it.”

The prize remained safe through the first four games of the series, with punters closer to injuring themselves than winning the loot, before Morton today showed how it was done.