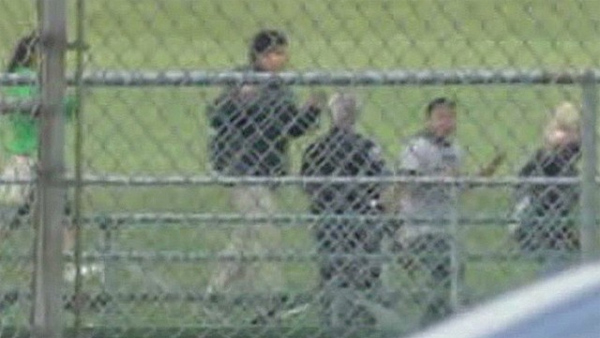 Fatal Oregon high school shooting: ‘This is not a drill’

(CNN) — When the shooting started at her high school near Portland, Oregon, early Tuesday, student Jaimie Infante didn’t recognize the sound of a gunshot.

She thought maybe somebody had dropped a book.

In reality, a lone gunman had opened fire at the school, killing one student and forcing others to flee.

An assistant principal told students to go into lockdown mode.

A teacher, who suffered non-life-threatening injuries, was treated at the scene. The suspected gunman is dead.

According to multiple law enforcement officials, the shooter was a student at the school. The gunman appears to have died from a self-inflicted wound, the sources told CNN.

Speaking to reporters, Troutdale Police Department Chief Scott Anderson said he could not confirm how the shooter died. He identified the student killed as 14-year-old Emilio Hoffman, a freshman.

Anderson met with the student’s parents Tuesday afternoon and “they want you to know that Emilio was a great kid and he was loved by all,” he said.

Officials believe they know who the gunman was, but they are “not confident enough” to reveal details yet, Anderson said.

He added: “This is a tragedy that affects our whole community. This is not supposed to happen to any school or to any child, but we will get through this together.”

‘Could have been much worse’

The shooting happened at about 8 a.m. (11 a.m. ET) at Reynolds High School in Troutdale, about 12 miles east of Portland. The city has a population of 16,400 people.

When it started, student Hannah League ducked into a classroom, where she and others huddled in a corner with no lights — hiding.

“I heard these pops and I thought they were firecrackers, but then I saw a teacher run out with his side kind of bloody,” League told CNN’s “Erin Burnett OutFront.”

“You don’t think something’s going to happen like that — especially to your school. It’s kind of, like, crazy,” she said.

Details about what led to the shooting weren’t immediately available. The gunman is believed to have used a rifle.

Anderson said the shooter entered the building that houses the school gym. Hoffman was shot and killed in a locker room. The shooter was found in a separate restroom, Anderson said.

He thanked officers for their quick response. He also thanked injured teacher Todd Rispler, who initiated the school lockdown despite being hurt.

“Without the quick and well-executed response, this tragedy could have been much worse,” the Reynolds School District said in a statement.

Anxious parents waited for news that their children were safe. One couple, Craig Tuholski and Tawnjia Reimer, were talking with CNNaffiliate KGW, about how agonizing the wait for news was, when Tuholski’s cell phone rang.

“Is that Chris?” Reimer asked before letting out a sigh of relief. “Oh, thank God.”

“That’s what we were waiting for,” Tuholski said after hanging up.

About an hour after the shooting, Oregon State Police said the area was secure and the situation was contained.

Obama: ‘Levels of gun violence off the charts’

The shooting, the latest in a long string of school shootings, sparked reaction nationwide.

“Our hearts go out to the Reynolds HS community. How many more students must we lose before committing to reduce gun violence in our schools?” Secretary of Education Arne Duncan asked on his Twitter account.

Speaking in Washington, President Barack Obama said the nation should be ashamed of its inability to get tougher gun restrictions through Congress in the aftermath of mass shootings that he said have become commonplace in America.

“Our levels of gun violence are off the charts. There’s no advanced, developed country on Earth that would put up with this,” he said in response to a question about gun violence.

Most members of Congress are “terrified” of the National Rifle Association, the President said, adding that nothing will change until public opinion demands it.

“The country has to do some soul searching about this. This is becoming the norm, and we take it for granted, in ways that as a parent are terrifying to me,” Obama said.

CNN first learned of the shooting through reports on Twitter.